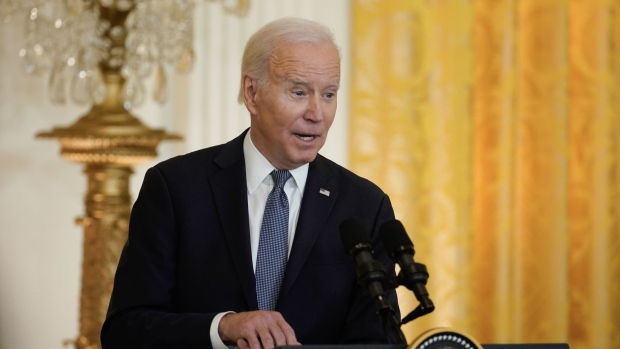 US President Joe Biden speaks during the White House Tribal Nations Summit at the Department of the Interior in Washington, DC, US, on Wednesday, Nov. 30, 2022. The first in-person Tribal Nations Summit of the Biden administration is allowing federal officials and Tribal leaders to engage about ways to invest in and strengthen Native communities, according to the White House. Photographer: Ting Shen/Bloomberg , Bloomberg

(Bloomberg) -- President Joe Biden sought to boost Georgia Senator Raphael Warnock’s campaign from afar on Friday, telling Democratic allies that his Republican opponent, Herschel Walker, did not “deserve to be in the United States Senate.”

“This is not a referendum on Warnock. This is a choice. A choice between two men. One man who does not deserve to be in the United States Senate,” Biden said as he joined an election phone bank organized by the International Brotherhood of Electrical Workers in Boston.

“One of the things about Warnock is he has real character. He’s a truly decent, honorable man,” Biden said.

Biden called the race “critical” to Democratic hopes to protect their agenda in a divided Congress next year, where Republicans will hold a narrow majority in the House of Representatives.

Democrats will control the Senate regardless of the Georgia results because of Vice President Kamala Harris’s tie-breaking vote, but Warnock’s reelection in Tuesday’s runoff would give the party a true majority and an advantage in the composition of specific committees. That, in turn, would help the party speed up the confirmation of Biden nominees without using as much valuable floor time.

“It really matters whether we continue to control the United States Senate in a way that we’re not going to be able to have anybody hold us up and not do certain things and Warnock is the real deal,” Biden said Friday.

The president’s trip to a politically friendly state, Massachusetts-- which also included a fundraiser for the Democratic Senatorial Campaign Committee -- to show support for a candidate in Georgia illustrated the political tightrope Biden is walking.

Biden, whose approval rating is just 41% according to a FiveThirtyEight polling average, has avoided campaigning directly in Georgia, where he could prove a liability for Warnock.

The president alluded to the reason he hasn’t appeared with Warnock, saying, “it’s a problem because they’re running against him saying he votes 98% of the time with Joe Biden. I wouldn’t tell them that on the phone.”

It’s a strategy that paid dividends in November’s midterm elections, where the president steered clear of high-profile Senate races in Arizona and New Hampshire and saw Democratic Senate candidates there emerge victorious.

The Georgia runoff became necessary after neither Walker nor Warnock received 50% of the vote in the Nov. 8 election.

Walker, a former University of Georgia and National Football League star, was handpicked by former President Donald Trump to run, but has been besieged by a series of personal controversies including allegations of infidelity and paying for an abortion.

And while Trump remains popular with the Republican base, he has fared poorly in Georgia, losing the 2020 election to Biden and seeing a series of his endorsed candidates struggle at the polls. Trump has opted to not visit the state during the runoff.