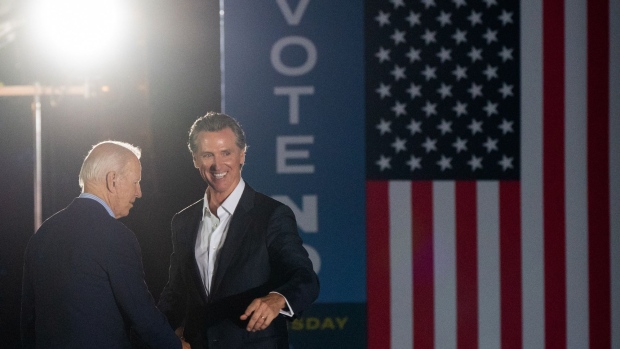 “The fact that voters in both traditionally Democratic and traditionally Republican parts of the state rejected the recall shows that Americans are unifying behind taking these steps to get the pandemic behind us,” Biden said in a statement.

The recall was fueled by the pandemic and anger over the Democratic governor’s attempts to control it. Top contender Larry Elder, a conservative talk show host who supports former President Donald Trump, had said he would roll back restrictions such as mask mandates. Newsom warned the moves would set back the fight against Covid.

The president said he and Newsom share a similar approach on Covid by backing “strong vaccine requirements, strong steps to reopen schools safely, and strong plans to distribute real medicines -- not fake treatments -- to help those who get sick.”

Newsom won the support of 63.9% of Californians who voted in the special election, according to the Secretary of State’s unofficial results as of early Wednesday. That’s better than the 62% of votes he garnered when he was elected in 2018.

The pandemic is the most important issue for California voters, according to an exit poll reported by CNN. About one-third of voters responded that it’s the top issue, while one-fifth said it was homelessness.

About 47% of respondents in the poll by Edison Research said Newsom’s policies on the pandemic have been about right, and one-third said they were too strict, according to CNN. The remainder said they’re not stringent enough.