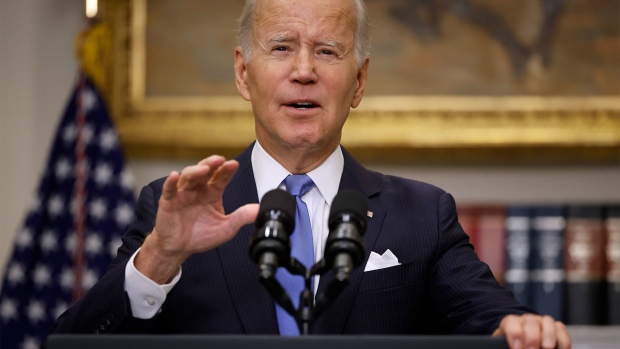 President Joe Biden delivers remarks on the federal government's response to Hurricane Ian in the Roosevelt Room at the White House on September 30, 2022 in Washington, DC. , Photographer: Chip Somodevilla/Getty Images

(Bloomberg) -- President Joe Biden declared that a massive leak from the Nord Stream gas pipeline system in the Baltic Sea was an intentional act, and that Russian statements about the incident shouldn’t be trusted.

“It was a deliberate act of sabotage. And now the Russians are pumping out disinformation and lies,” Biden told reporters Friday at the White House.

“We’re working with our allies to get to the bottom exactly what precisely happened and at my direction have already begun to help our allies enhance the protection of this critical infrastructure,” he added.

While Biden didn’t provide evidence for the US conclusion, his assertions were the strongest American statement yet about allegations that sabotage had triggered underwater explosions behind the massive natural gas plumes. His national security adviser, Jake Sullivan, later said that because of the depth of the pipelines, the attack required “some degree of sophistication.”

But he declined to assign blame to Russia, saying the US needs more information about the incident. Sullivan said the US did not believe any NATO ally was responsible.

“I don’t want to get ahead of myself in terms of asserting how exactly this happened, or who exactly did it until we’re standing on solid ground,” Sullivan said.

Biden said the US planned to send divers to the scene to aid in the investigation. Four leaks in the Nord Stream 1 and Nord Stream 2 pipelines have been discovered so far.

Hours earlier, Norway announced it was stepping up patrols of the country’s energy facilities and that Germany, France, and the UK were providing assistance as it increased monitoring of oil and gas installations in the Baltic and North Seas. Private companies -- including ConocoPhillips and TotalEnergies SE -- have increased security following the leaks and reports of airborne drones near their offshore facilities.

Natural gas prices in Europe had fallen earlier on Friday as ministers backed measures to contain the region’s energy crisis.

Russian President Vladimir Putin earlier Friday accused the US and its allies of organizing the blasts targeting the pipelines during a speech discussing Russia’s takeover of Ukrainian territory, but offered no evidence to substantiate his allegations. Biden flatly denied US responsibility.

“Just don’t listen to what Putin is saying,” Biden said. “What he’s saying we know is not true.”

Germany Economy Minister Robert Habeck suggested Friday that Putin’s denials could be an effort to displace responsibility, while saying that leaders should wait for the result of the ongoing investigation.

“Russia saying ‘it wasn’t us’ is like saying ‘I’m not the thief,’” Habeck told reporters Friday in Brussels after a meeting of EU energy ministers.

Biden also said the US and the world would not recognize Russia’s attempted annexation or be “intimidated by Putin and his reckless words and threats.”

“He can’t seize his neighbor’s territory and get away with it,” Biden said. “It’s as simple as that.”

(Updates with additional context and comments throughout)