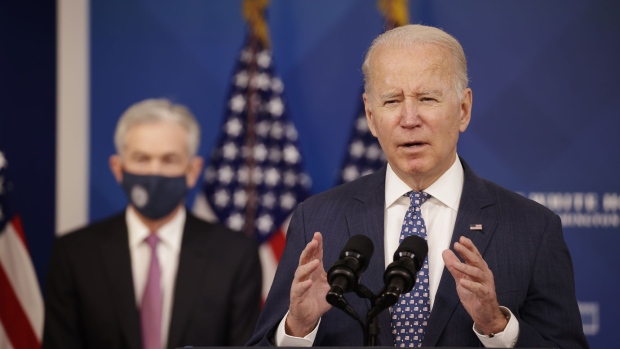 U.S. President Joe Biden speaks while announcing his Board Of Governors of the Federal Reserve nominees in the Eisenhower Executive Office Building in Washington, D.C., U.S., on Monday, Nov. 22, 2021. Biden selected Jerome Powell for a second four-year term as U.S. Federal Reserve chair and elevated Governor Lael Brainard to vice chair, maintaining consistency at the central bank as it grapples with the fastest inflation in three decades along with the lingering effects of the coronavirus pandemic. , Bloomberg

(Bloomberg) -- President Joe Biden said Federal Reserve Chairman Jerome Powell is the right person to lead the central bank as the U.S. economy continues to recover from the pandemic and the government moves to combat rising inflation.

“It’s the Fed’s job to balance two key goals. The first is to achieve maximum employment to get as many Americans working as possible. The second is to keep inflation low and stable,” Biden said. “To meet these goals is going to require patience, skill and independence.”

The president said he’d chosen not to replace Powell, appointed by his Republican predecessor, with a more liberal nominee because “we need stability and independence at the Federal Reserve.” He said he also sought to avoid politicizing the nomination.

“Jay’s proven the independence I value in the Fed chair,” Biden said. “In the last administration, he stood up to unprecedented political interference.”

The president’s choice is a vote of confidence in Powell’s leadership through the coronavirus pandemic, despite a rapid rise in inflation in recent months and agitation by some progressive lawmakers and activists for change. The president said that the nation’s post-pandemic economic growth and jobs gains validated his selection of Powell for a second four-year term.

“Record job creation. Record economic growth. Record new small business creation,” Biden said in remarks at the White House. “That’s a story that should give us confidence about the economy that we’re building.”

But he said that in conversations with Powell, he had received assurances the Fed chair would focus on combating not only inflation but also the impacts of climate change, a priority on the left.

“We know there’s a lot of fear and uncertainty in the country,” he said. “We know it’s tough for families to keep up with the rising cost of gasoline, food, housing and other essentials.”

Biden was joined at the event by Powell and Lael Brainard, the Federal Reserve governor favored by progressives for chair but instead nominated by Biden to serve as the central bank’s vice chair. Biden said that the pair shared his belief that the Fed should do more to help boost the middle class and confront economic risks posed by climate change.

Brainard, Biden said, had been a “steadfast voice” at the central bank for working Americans.

“She’s led the Fed’s efforts to make sure our banking system serves everyone in the communities they serve,” Biden said. “So that regardless of where you live or your background, every American can have access to credit they need to start a business, buy a home and just have a fair chance in life.”

By picking Powell, Biden likely will avoid a tough Senate confirmation battle in what is already shaping up to be a chaotic end to the year on Capitol Hill. Lawmakers are negotiating the president’s $1.64 trillion social spending bill -- a key element of his domestic economic agenda -- and facing imminent deadlines to extend government funding and the debt ceiling.

Powell, who was originally chosen as Federal Reserve chair by former President Donald Trump, is expected to garner significant Republican support in the upper chamber. Senate Banking Committee Chair Sherrod Brown, an Ohio Democrat, and the top Republican, Patrick Toomey of Pennsylvania, both indicated they would support Powell’s renomination.

“We will use our tools both to support the economy and a strong labor market and to prevent higher inflation from becoming entrenched,” Powell said at the White House event.

Brainard said she would put “working Americans at the center of my work at the Federal Reserve” by “getting inflation down at a time when people are focused on their jobs and how far their paychecks will go.”

“It means supporting a growing economy that includes everyone,” she said. “It means ensuring that financial markets are thriving and resilient, and the economy is sustainable for future generations.”

Biden informed Brainard and Powell about his decision on Friday, according to a person familiar with the internal discussions who requested anonymity to detail the private conversations.

A small circle of advisers weighed in on the president’s choice, including Treasury Secretary Janet Yellen, a former Fed chair herself, and his National Economic Council director, Brian Deese. Both attended the White House event.

There are three vacancies on the Fed board that Biden has yet to fill. None of the board’s current members are nonwhite, and just two -- Brainard and Michelle Bowman -- are women.

Biden promised that “my additions will bring new diversity to the Fed, which is much needed and long overdue in my view,” he said. One of the people the White House has vetted for a seat is William Spriggs, the chief economist for the AFL-CIO, according to two people familiar with the matter. Spriggs is Black.