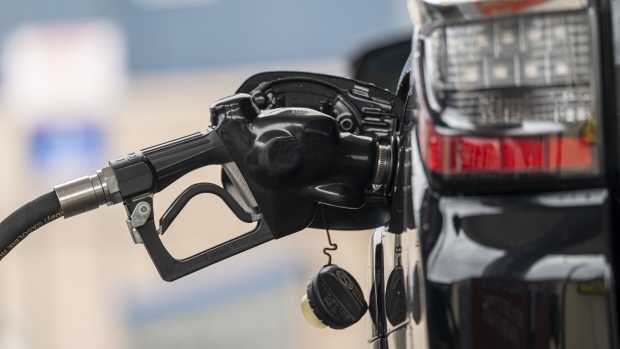 A fuel nozzle in a car at a gas station in San Francisco, California, U.S., on Thursday, Oct. 21, 2021. American drivers will continue to face historically high fuel prices as gasoline demand surged to the highest in more than a decade. Photographer: David Paul Morris/Bloomberg , Bloomberg

(Bloomberg) -- President Joe Biden said Thursday night that Americans should expect high gasoline prices to continue into next year because of policies by OPEC and other foreign oil producers.

“My guess is you’ll start to see gas prices come down as we get by and going into the winter -- excuse me, into next year, in 2022,” the president said during a CNN town hall in Baltimore, responding to a question about rising inflation. “I don’t see anything that’s going to happen in the meantime that’s going to significantly reduce gas prices.”

The president added that prices would “ultimately” decline as the country shifted to renewable energy over the next few years.

“Gas prices relate to a foreign policy initiative that is about something that goes beyond the cost of gas,” he said.

“That’s because of the supply being withheld by OPEC and so there’s a lot of negotiation that is -- there’s a lot of Middle Eastern folks who want to talk to me,” he said. “I’m not sure I’m going to talk to them, but the point is it’s about gas production. There’s things we can do in the meantime though.”

He wasn’t more specific about any discussion with Middle Eastern leaders or what, exactly, could be done immediately.

His prediction on prices remaining high echoed the opinions of analysts, who point out that demand by drivers returning to roads has soared.

A key indicator of gasoline demand rose to the highest level for this time of year since 2007, according to Energy Information Administration data. Stockpiles dropped to their lowest in nearly two years in the fall, when gasoline demand usually declines after the summer driving season.

The national average of retail gasoline prices were at $3.36 per gallon on Tuesday, according to AAA.