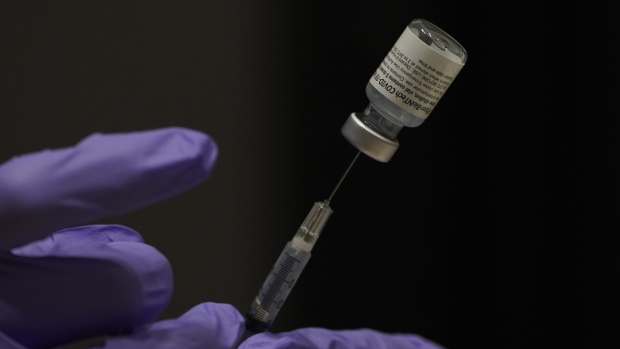 A pharmacist prepares a syringe of the Pfizer BioNtech Covid-19 vaccine in Tucson, Arizona, U.S., on Friday, Jan. 15, 2021. Pima County is moving into Phase 1B of Covid-19 vaccinations and open several new vaccination sites by the end of January. Photographer: Cheney Orr/Bloomberg , Bloomberg

(Bloomberg) -- President Joe Biden said Sunday the U.S. may be able to provide 1 billion more doses of coronavirus vaccine to the world by 2023, and again raised the possibility that the virus may have escaped from a Chinese laboratory.

“There’s a possibility over in 2022, going into 2023, that we would be able to be in a position to provide another billion U.S., but that’s not done yet,” he said Sunday at a news conference in Cornwall, England, following the completion of the Group of Seven summit.

At the meeting, the U.S. promised to send 500 million doses to low-income countries by the end of next year, a move that comes as U.S. demand for shots is waning as more of the population is already vaccinated.

“There was a clear consensus among all of our colleagues in the G-7 that this wasn’t the end,” he added.

Biden also noted that China has not granted access to its laboratories so that scientists can fully study the origins of the Covid-19 outbreak.

“I haven’t reached a conclusion, because our intelligence community is not certain yet whether or not this was a consequence of, from the marketplace, a bat interfacing with animals in the environment that caused this Covid-19, or whether it was an experiment gone awry,” he said. “It’s important to know the answer to that.”

Covid loomed large throughout the G-7 meetings, which were teed up by Biden announcing a pledge to donate 500 million Pfizer doses to low-income countries, beginning in August and running through 2022. The U.S. contribution marks half of the 1 billion doses G-7 nations pledged at the summit to provide to the rest of the world.

Biden’s announcement was a de facto response to growing criticism that the U.S. hasn’t done enough to share doses with the world. Biden has begun to do so as the pace of shots in the U.S. has fallen, from a high of 3.4 million per day in mid-April to about 1.1 million now.

Biden has set a goal of giving 70% of U.S. adults at least one shot by July 4, though the slowing pace has him at risk of missing his target. Vaccine take-up varies widely among U.S. states, with Northeast states generally much closer to Biden’s goal than those in the Deep South.

By contrast, the U.K. is likely to extend its current pandemic restrictions as cases, driven by the fast-spreading delta variant, continue to rise from spring-time lows.