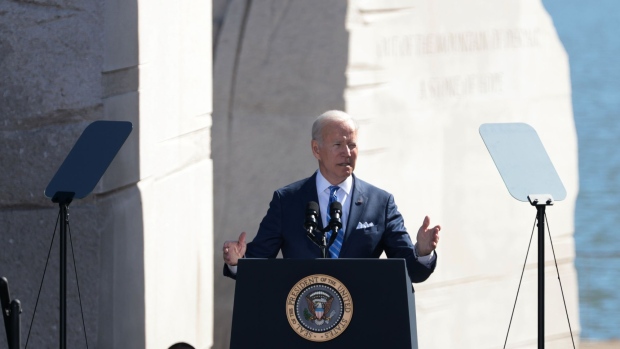 U.S. President Joe Biden speaks during 10th anniversary celebration of the dedication of the Martin Luther King Jr. Memorial in Washington, D.C., U.S., on Thursday, Oct. 21, 2021. The memorial, carved by sculptor Lei Yixin, was dedicated in 2011 to honor King's legacy and the struggle for freedom, equality, and justice. Photographer Oliver Contreras/Sipa/Bloomberg , Bloomberg

(Bloomberg) -- President Joe Biden said Thursday that white supremacy motivated supporters of Donald Trump who rioted at the U.S. Capitol on Jan. 6, and accused the former president of appealing to racists.

“The violent, deadly insurrection on the Capitol nine months ago, it was about white supremacy, in my opinion,” Biden said of the Jan. 6 riot, during a speech acknowledging the 10-year anniversary of the Martin Luther King Jr. memorial in Washington.

He placed the incident in the context of other racist episodes in U.S. history, including a white supremacist rally in Charlottesville, Virginia, in 2017 in which one counter-protester was killed.

“The through-line is that hate never goes away,” he said.

He added later that “we had a president who appealed to the prejudice,” but that “the good news is, we ripped the Band-Aid off.”

It’s unusual for Biden to mention Trump by name in speeches. He lamented that to about half of U.S. Republicans, “I am not your president. Donald Trump is still your president.”

“As we Catholics say, ‘Oh my God,”’ he said, crossing himself to laughter from his audience.