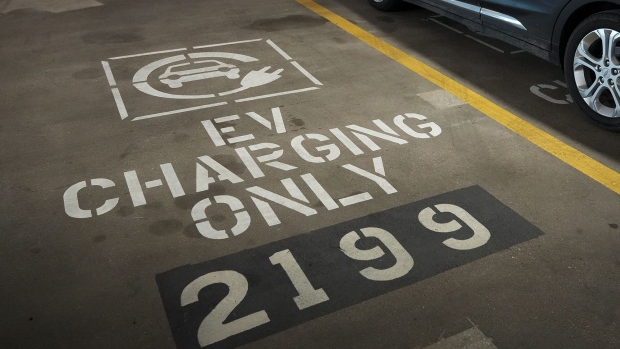 (Bloomberg) -- The White House is negotiating to have automakers pledge that 40% or more of the vehicles they sell in the U.S. will be electric by the end of the decade, something the companies say will require the government to help promote the use of the cars.

Brian Rothenberg, a spokesman for the United Auto Workers, said the union is in discussions with the White House and carmakers about a sales target, but he said an agreement has not been reached. General Motors Co. also said no agreement has been reached.

A second person familiar with the negotiations also confirmed the talks on an EV sales target are happening but said there’s no agreement and the talks are still at an early stage. A pledge on new car sales will be significant because while some U.S. automakers have promised to convert their model lineups to electric vehicles, they haven’t made any promises on volumes.

Automakers are looking for support from the government in meeting those goals, such as subsidies or funding for charging infrastructure like that contained in a bill working its way through the Senate now.

Representatives for the White House and Stellantis NV, formerly known as Fiat Chrysler, declined to comment. GM, in a statement, said “we do not have an agreement to comment on at this time.” The talks were previously reported by the Washington Post.

“Ford has already said that we are leading the electrification revolution and planning on at least 40% of our global vehicle volume being all-electric by 2030,” Melissa Miller, a Ford Motor Co. spokeswoman, said in an emailed statement. CEO “Jim Farley said Wednesday that customer reaction to EVs so far is exceeding our expectations, and we’re going to stay ahead of customer demand.”

An agreement with automakers could help build support for a $550 billion, bipartisan infrastructure deal that passed a procedural hurdle in the Senate this week. The bill would dole out $7.5 billion to help build a nationwide network of electric vehicle chargers, an amount that would nearly double all prior public investment by utilities, states and the federal government in those critical charge points.

The White House has not said how many charging stations the money will pay for, but it said the funding represents the “first-ever national investment in EV charging infrastructure in the United States.”

But it’s still just a fraction of the $87 billion analysts and environmentalists say is needed this decade to swiftly electrify the nation’s cars and trucks that will require reliable access to electrons.

“In context, it’s a big investment, but relative to the amount that’s needed to really set us up for 100% electrification, it’s a down payment,” said Nick Nigro, founder of Atlas Public Policy, a research firm that analyzes the EV market.

In many places, getting charging stations installed will require upgrades in power transmission and other systems to support them, Gallentine said.

“There’s a lot of factors that play into the number of actual chargers we get,” Gallentine said. “States are going to have to look at the amount of money they are going to get out of this package and decide how they will want to spend it.”

A rapid rollout of electric vehicle charging stations is seen as critical to building consumer support for the cars and meeting President Joe Biden’s goal of halving U.S. greenhouse gas emissions by the end of the decade.

Automakers are also lobbying for an expansion of the electric vehicle tax credit, currently valued at as much as $7,500. Tesla Inc. and GM have already passed a 200,000-per-manufacturer ceiling at which the value of those credits phases down.

“We have a growing need for more and more infrastructure to accommodate that demand,” he said. “And if we’re actually going to approach the level of EV market share that many states are now setting as goals, we need an order of magnitude more infrastructure.”

In March Biden asked Congress to dedicate $174 billion to electric vehicle investments -- including by installing a network of half a million chargers nationwide. As lawmakers debated the details of that spending, the administration pressed for $15 billion, while some senators pushed for $2.5 billion.

At $7.5 billion, the electric vehicle charging spending in the infrastructure deal developed by a bipartisan working group of senators reflects a middle ground.

Although legislative language was not immediately available Thursday, Bracewell LLP Principal Liam Donovan said the measure is likely to be modeled after provisions of a surface transportation bill approved by the Senate Environment and Public Works Committee earlier this year.

That bill would set up a grant program for alternative fuel corridors and community grants, with the aim of strategically deploying EV chargers and other infrastructure for public use. States, local governments, Indian tribes and other entities could seek the grants, and recipients could use the money to contract with private companies to install the systems and pay for the first five years of operations.