Supply Issues Will Go Well Into 2022

President Joe Biden will turn his focus to supply-chain transportation bottlenecks on Wednesday, as the congested Port of Los Angeles will announce a 24 hours a day, seven days a week effort to confront the squeeze on goods.

A meeting at the White House will convene corporate executives, labor leaders as well as port officials, and Biden plans to highlight their efforts to ease distribution backlogs and respond to product demands that have grown during the coronavirus pandemic, two administration officials said on the condition of anonymity to preview the day’s events.

The 24/7 shift by the Port of Los Angeles follows a move last month by the nearby Port of Long Beach to a similar schedule. FedEx Corp., United Parcel Service Inc. and Walmart Inc. are also pledging to move to 24/7 operations, the official added, while Target. Corp., Samsung Electronics Co. and Home Depot Inc. are taking steps to start addressing the backlog in distribution.

The White House said that among those six companies, a total of 3,500 additional containers a week would be moving at night through the end of the year.

“Large companies are announcing they will use expanded hours to move more cargo off the docks, so ships can come to shore faster,” the White House said. “Unlike leading ports around the world, U.S. ports have failed to realize the full possibility offered by operation on nights and weekends.”

Analysts see supply-chain problems as a drag on economic growth as well as their projections for the coming months, while consumers regard them as a sign of, perhaps, deeper problems with the economy.

Though the Biden administration is feeling the economic blowback from supply-chain congestion, its power to manage it is limited since all the links in the chain are in private hands. In recent efforts to improve distribution, it has tried to play an honest-broker role in coordinating commitments made across the private sector and in working with labor unions, the official said. It is urging entities along the supply chain to engage in a 90-day dash to the end of the year to eliminate supply jams that can be speedily addressed, the official added.

The administration hopes that the moves being rolled out on Wednesday will motivate other companies to take similar steps, the official said, and will next set its sights on working with the trucking and freight industries.

The chief executives of the companies making new pledges on Wednesday are set to attend a virtual meeting with Biden, as are the executive directors of the Port of Los Angeles and the Port of Long Beach. Leaders from key unions -- the Teamsters, the AFL-CIO’s Transportation Trades Department, and the International Longshore and Warehouse Union -- and trade associations -- the U.S. Chamber of Commerce, the National Retail Federation and the American Association of Railroads, among others -- are also expected to attend. 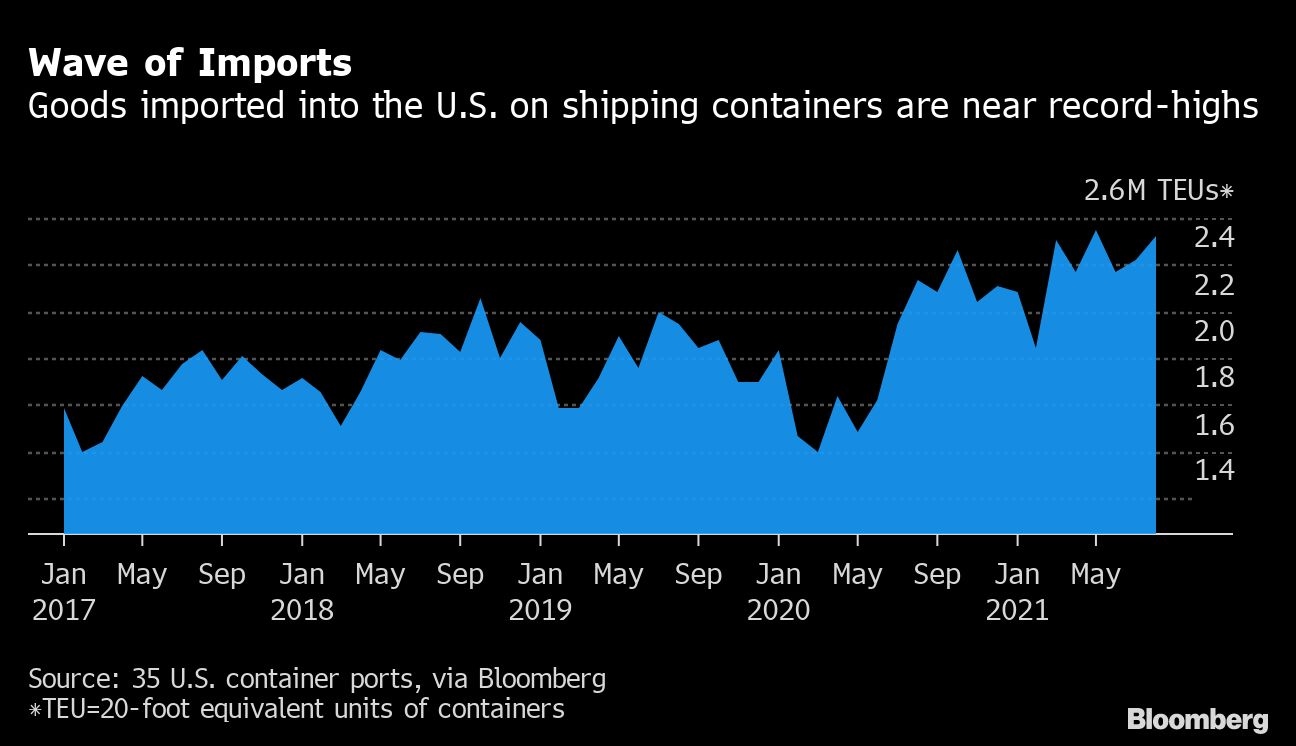 The White House has been working for months to address near-term supply chain problems, establishing a wide-ranging review with a February executive order and forming a Supply Chain Disruptions Task Force in June.

Supply chain snags are ubiquitous for every major industry across the U.S., affecting everything from smartphones to tractors to couches. There are a range of problems, including a lack of domestic production capacity, a shortage of trucks, a dearth of workers, overbooked ocean freight and, in some cases, decaying infrastructure.

The situation is so dire that companies are internally forecasting hangups will last through most of 2022, which could slow hiring, dampen profits and hamper economic growth.

For instance, the global chip shortage prompted Caterpillar earlier this year to warn investors that the company might not meet demand. The shortfalls led Detroit automakers to become more resigned to sales dropping after striking an optimistic tone in the first half of the year. Apple, one of the largest technology companies in the world, is likely to slash its iPhone 13 production targets by as many as 10 million units for 2021, Bloomberg News reported Tuesday.

The International Monetary Fund on Tuesday lowered its global and U.S. growth forecasts for this year, charting a slower than anticipated economic recovery. Its 2021 estimate for the U.S. fell a full percentage point to 6 per cent, citing supply constraints as a key factor, though it also hiked its 2022 projection for the U.S. from 4.9 per cent to 5.2 per cent.