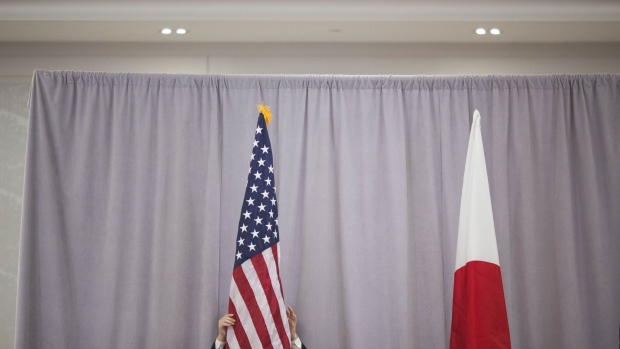 A woman adjusts an American flag before Shinzo Abe, Japan's prime minister, addresses members of the media following a meeting with U.S. President-elect Donald Trump in New York, U.S., on Thursday, Nov. 17, 2016. Abe said Trump was a trustworthy leader in comments after his first meeting with the President-elect, whose statements on trade and security have sparked concern in Japan. Photographer: John Taggart/Bloomberg , Bloomberg

(Bloomberg) -- U.S. President Joe Biden will seek to win Japan’s backing for a common response to Russia if it attacks Ukraine during his first virtual summit on Friday with Japanese Prime Minister Fumio Kishida.

Ahead of the talks, a senior administration official said Biden wants to discuss a “strong, united response that would result from further Russian aggression toward Ukraine.” The official also said the pair would talk about “common threats,” signaling a discussion on China’s military buildup and North Korea’s recent weapons tests.

The format of the meeting is unprecedented for Japan, whose leaders have pressed for in-person summits with their U.S. counterparts even during the pandemic. It comes amid heightened diplomatic activity between Washington and Ukraine prompted by fears of a potential Russian invasion.

“I want to make this an opportunity to show the world the unwavering ties between Japan and the U.S., and to take the alliance to a new level,” Kishida told parliament Thursday.

Kishida’s former boss, Shinzo Abe, held a series of meetings with Vladimir Putin in a bid to resolve a territorial dispute dating back to World War II. Nonetheless, Japanese Foreign Minister Yoshimasa Hayashi signed up to a December Group of Seven statement warning that Russia would face a “severe cost” if it invaded Ukraine. It is unclear what role pacifist Japan could play in the event of a conflict.

Biden Expects Russia to ‘Move In’ on Ukraine, Warns Putin

Biden has sought to strengthen the U.S. alliance with Japan after former President Donald Trump, who imposed metals tariffs that are still in place, repeatedly called the value of the relationship into question. In particular, the two countries have found common ground on China: A joint statement this week on the Treaty on the Non-Proliferation of Nuclear Weapons called on Beijing to “reduce nuclear risks, increase transparency, and advance nuclear disarmament.”

Japan relies on the U.S., its only treaty ally, for national security in the face of threats from China, as well as a potential return to intercontinental ballistic missile launches from North Korea. While Japan’s public typically attaches importance to the personal relationship between the prime minister and the U.S. president, Kishida has seen high approval ratings of late as many citizens support his measures to stem virus cases.

Japan agreed to hold the summit by video due to the “significance of having an early meeting to enable the leaders to deepen trust,” Chief Cabinet Secretary Hirokazu Matsuno told reporters this week.

Kishida’s predecessor, Yoshihide Suga, was the first foreign leader to hold a summit with Biden at the White House after he took office in 2020. By contrast, since becoming premier, Kishida has met Biden face-to-face only briefly on the sidelines of the COP-26 summit in Scotland last year.

Kishida’s next opportunity to meet the U.S. president in person may be at an annual summit of the leaders of the Quad countries, which also includes Australia and India. Japan might host the meeting in the spring, Kyodo News reported last year, citing sources familiar with the matter.