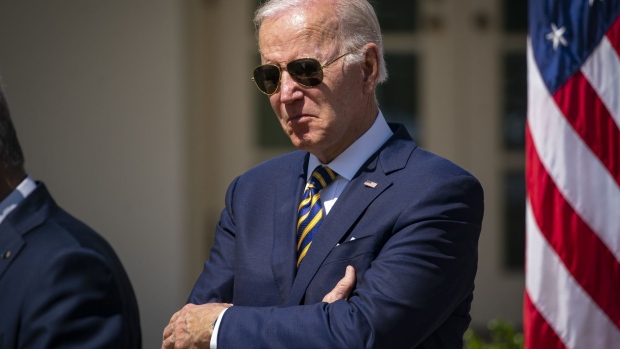 (Bloomberg) -- President Joe Biden has made just two endorsements in Democratic primary races for House seats this year, drawing a contrast with his predecessor while showing limited influence with his party’s voters.

One of Biden’s picks, incumbent Representative Shontel Brown, handily defeated a more liberal challenger in a Cleveland, Ohio, district. The other, seven-term Representative Kurt Schrader of Oregon, looks likely to lose to a progressive challenger.

The president backed Brown because she supported his agenda in Congress, according to a Biden adviser who asked not to be identified describing internal strategy. Her opponent, Nina Turner, said in 2020 that voting for Biden was like eating a “bowl of s---.”

Schrader got Biden’s endorsement because he was one of the president’s early supporters and backed his infrastructure and spending plans, the adviser said. He has voted against some of the president’s other priorities, including a $1.9 trillion pandemic relief measure and a measure to reduce drug prices.

Sitting presidents in the past have limited their involvement in their party’s primaries, but former President Donald Trump broke that mold, freely intervening in races to back candidates he viewed as most likely to defeat Democratic candidates or most loyal to him personally.

Biden has limited his primary endorsements in part to keep with pre-Trump presidential expectations, but also because he is wary of exacerbating divisions between the liberal and moderate wings of the Democratic Party, according to his supporters. The split has frustrated Biden’s legislative ambitions, leading to his “Build Back Better” economic agenda failing in Congress last year.

“We have divisions in the Democratic Party that are based around whether you’re progressive or moderate and I think Biden going in somewhere reinforces the division,” said Democratic strategist Doug Sosnik. “Trump has done something that almost for a generation has increasingly not mattered, which is having an endorsement that has an impact.”

Trump has endorsed more than 170 candidates for Congress, governor, and even state legislatures and municipal positions this year, enjoying a parade of Republican office-seekers clamoring for his seal of approval -- a spectacle that’s helped Trump tighten his grip on the party.

Trump remains widely popular among Republican voters in early primary states, including Ohio and Pennsylvania, according to Morning Consult polling. But Biden’s approval among Democrats has sagged and his broader popularity has suffered as he struggles to contend with inflation and the lingering pandemic, which may mean that Democrats in competitive races against Republicans in the fall will avoid him.

Biden’s approval rating fell to 39% in an AP-NORC poll released Friday, the lowest point of his presidency. Less than three-quarters of Democrats approved of his job performance. That number never fell below 82% last year in the survey.

Even his limited intervention in the Democratic Party’s nominating process has cost Biden some blowback. His backing of Schrader in particular irked progressives.

The Oregon lawmaker joined with other moderates to decouple the infrastructure plan from Build Back Better, a maneuver that ultimately helped torpedo the latter package, which was focused on social spending. Schrader ultimately voted in favor of Build Back Better, but it later stalled in the Senate.

Schrader also apologized after ABC News reported that he referred to Trump’s second impeachment over the Jan. 6 insurrection as a “lynching.” Schrader ultimately voted to impeach Trump.

Progressive candidate Jamie McLeod-Skinner leads Schrader by 22 percentage points in their primary contest, though only about half the votes have been tallied. The incumbent had been backed by House Democrats’ campaign arm, Biden and more than $2 million in super PAC spending.

McLeod-Skinner dubbed Schrader the “Joe Manchin of the House,” referring to the West Virginia Democratic senator whose opposition killed Build Back Better.

The Biden adviser disputed the notion that McLeod-Skinner’s probable victory was a rejection of Biden, saying that she ran on support for his agenda. She has not spoken to the president but has been in touch with White House staff, according to the adviser.

Liberal activists want to see Biden take a tougher line against moderate incumbent Democrats, whom they say are responsible for stymieing his agenda, by backing their progressive opponents.

“The signal from the president should not be, ‘if you cross me, I will endorse you.’ It has to be, ‘if you cross me there will be consequences’ because that will impact the incentives in every future fight,” said Adam Green, co-founder of the Progressive Change Campaign Committee.

Liberal groups have eyed next week’s primary pitting Texas Representative Henry Cuellar against progressive activist and lawyer Jessica Cisneros, who has the backing of Senator Elizabeth Warren, the PCCC and other left-leaning groups. Cuellar is the only House Democrat who does not support abortion rights and, like Schrader, favored splitting infrastructure from Build Back Better.

Biden has not made an endorsement in the race and is not expected to. The Biden adviser said the president will endorse incumbents who have supported his agenda and he’s expected to make more endorsements in the future. He will not endorse in open primaries -- those without incumbents -- and considers requests for endorsements as they are made by candidates and campaigns, the adviser said.

Matt Barnett, co-founder of the center-left think tank and advocacy group Third Way, said it’s natural for the centrist Democrat Biden to prefer other moderate candidates, but “he’s the leader of the whole party.”

“He still has work that he needs to do with with his very broad coalition and his very narrow margins. And so he has to be careful,” Barnett said.

Trump’s approach also comes with pitfalls. While the overwhelming majority of candidates he’s backed have won their primaries, Tuesday’s contests fueled questions about the strength of his endorsement.