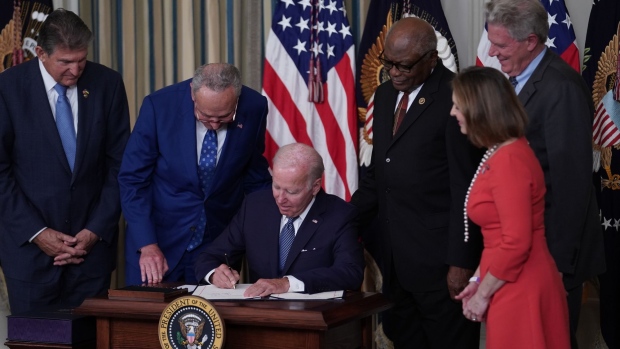 US President Joe Biden signs H.R. 5376, the Inflation Reduction Act of 2022, in the State Dining Room of the White House in Washington, D.C., on Aug. 16. Photographer: Sarah Silbiger/Bloomberg , Bloomberg

“With this law, the American people won and the special interests lost,” Biden said at the White House. “It’s about delivering progress and prosperity to American families.”

The measure, known as the Inflation Reduction Act, contains key parts of Biden’s policy agenda that just weeks ago appeared to have virtually no chance of becoming law. The House passed the bill Aug. 12 on a party line 220-207 vote after the Senate voted on Aug. 7 to approve it. No Republican in either chamber voted for it.

Biden and Democrats desperately need the law, and a spate of other legislative wins, to help boost their poll numbers and improve their chances of protecting congressional majorities they are in danger of losing to Republicans in the fall. Biden’s approval rating stands at just 40%, while 55% of Americans disapprove of the job he is doing, according to FiveThirtyEight’s polling analysis.

The president and Cabinet officials are planning more than three dozen events in 23 states during the coming weeks to highlight the new law, according to a memo from the White House. Biden also plans to hold a celebration in Washington on Sept. 6 once lawmakers return from August recess.

Biden’s signature caps off a tumultuous effort that began last year when Democrats took control of Congress and the White House to approve new social and economic programs that the president promised during his 2020 campaign.

The push was derailed in December when centrist Democratic Senator Joe Manchin of West Virginia pulled out of negotiations over a broader proposal called “Build Back Better” that contained more elements of Biden’s agenda. It was later revived after Manchin negotiated a breakthrough deal in late July on a smaller package with Senate Majority Leader Chuck Schumer. They overcame a last-minute snag from moderate Democratic Senator Kyrsten Sinema of Arizona on tax provisions.

The roughly $437 billion bill would cap and lower the price of medicines for seniors in part by letting Medicare negotiate drug prices for the first time, a long-sought goal for Democrats. It contains $374 billion in energy and climate provisions, including tax credits for electric vehicles and incentives for clean-energy projects, in what the White House says is the largest-ever single investment to address climate change.

“This bill is the biggest step forward on climate, ever,” said Biden, “and is going to allow us to boldly take additional steps toward all my climate goals.”

It would also extend subsidies for Obamacare premiums for three years, inject $80 billion into the Internal Revenue Services’ budget, impose a 15% minimum tax on large corporations and a 1% excise tax on stock buybacks.

But to win over Manchin, Democratic leaders had to give up on some of the party’s more ambitious goals, such as paid family and medical leave for workers nationwide, free pre-K, and an extension of the child tax credit. They also included new support for fossil-fuel projects in the law. Democrats dropped a tax provision that would have targeted wealthy fund managers after Sinema objected.