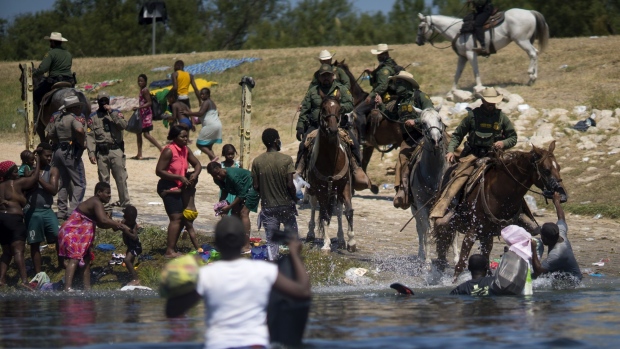 (Bloomberg) -- President Joe Biden faces another border crisis as thousands of Haitians try to cross into the U.S. from Mexico, and his administration’s response has sparked harsh criticism from fellow Democrats over what they see as inhumane treatment of the migrants.

Democrats, including Senate Majority Leader Chuck Schumer, have joined advocacy groups in demanding the administration stop flying hundreds of the migrants back to Haiti each day without hearing their asylum claims. The impoverished country is in fresh turmoil following the assassination of its president and an earthquake in August.

The administration has returned some of the migrants to Haiti and has closed an international bridge at Del Rio, Texas, where as many as 15,000 people had camped to await their processing by U.S. immigration authorities or removal.

Images of U.S. Border Patrol agents menacing the migrants from horseback, appearing to use their reins as lashes, outraged many Democrats, some of whom even accused the administration of targeting Haitians because they are black. The White House has called the scenes “horrific,” the agents involved were placed on administrative leave and the Department of Homeland Security is investigating.

The administration’s stumbling response to the appearance of the Haitian migrants follows missteps during Biden’s hasty withdrawal from Afghanistan in August and in the development of a defense pact with Australia that outraged and alienated France, America’s oldest ally. A president who promised Americans he would return competence to the White House has seen his public approval rating plummet over the past month.

Criticism over the administration’s approach toward Haitian migrants comes after a presidential campaign in which Biden repeatedly described former President Donald Trump’s border and immigration policies as inhumane. But one of Biden’s allies, California Representative Maxine Waters, said the treatment of Haitian refugees on the new president’s watch is “worse than what we witnessed in slavery.”

The administration’s point person on Haiti, U.S. Special Envoy for Haiti Daniel Foote, quit in an unusually public way on Thursday, assailing a “deeply flawed” U.S. policy toward Haiti and the “inhumane, counterproductive decision” to deport Haitians in a resignation letter.

The White House responded with equally unusual rebukes. State spokesman Ned Price said Foote “mischaracterized” his departure and “failed to take advantage of ample opportunity to raise concerns about migration during his tenure and chose to resign instead.”

Since September 19, 12 U.S. government flights carrying 1,401 Haitian migrants have arrived in Haiti, DHS said Thursday. Another 3,206 Haitians have been moved within the U.S. to face removal proceedings or expulsion through Title 42, the law first used by the Trump administration -- and carried on by Biden -- to deport migrants because of Covid-19 health threats.

The department also said Thursday it had temporarily suspended the use of horse patrols at Del Rio.

Haiti’s ambassador to the U.S., Bocchit Edmond, sees a “double standard” in how his countrymen are treated compared to other migrants.

“Just because they violated U.S. law doesn’t stop them from being human beings, therefore they have the right to fair treatment, dignity and due process. We understand they will be deported, but give them a chance at due process,” he said in an interview.

Advocates say the Biden administration should have seen the situation coming, at least since the early July assassination of Haitian President Jovenel Moise. Barely a month later, in mid-August, a 7.2 magnitude earthquake struck the island nation, which is still recovering from an especially devastating 2010 quake.

Many of the Haitian migrants have lived in South America and sought to come to the U.S. with the expectation they could qualify for what’s known as Temporary Protected Status, or TPS, Mexico’s Foreign Affairs Minister Marcelo Ebrard said Tuesday.

There were also warnings from Central American leaders of potential migrant surges and requests for more resources at Del Rio from the union representing U.S. border agents.

Yet administration officials say they were caught off guard.

“We watch the flow of individuals who are seeking to migrate irregularly through Mexico from the Northern Triangle countries, and further south we do indeed track it,” Homeland Security Secretary Alejandro Mayorkas said at a House committee hearing on Wednesday. But, he said, “the speed with which this materialized is unprecedented.”

Mexico’s president, Andres Manuel Lopez Obrador, said Thursday that human-smuggling operations had contracted with bus companies to transport Haitians to the Texas border, and that his administration met with some transportation firms on Wednesday.

Activists have cast doubt on this narrative, suggesting the Haitians’ arrival was not orchestrated by criminal groups.

“We asked them to help us because they know that it is illegal,” AMLO said in a news conference. “We’re attending to all of this, and we’re also proposing to the government of the United States that jointly, we take action in other countries, that there is cooperation for development, that they do not delay, and that we start to help people now.”

Republicans were already assailing Biden’s border policies, which Democrats generally had defended until now. GOP lawmakers say the rush of Haitian asylum seekers are the result of Biden’s “open borders” policies that make the U.S. seem open to any migrants who can find their way to the country.

Democrats see the arrival of Haitian refugees as an urgent humanitarian challenge that can only be managed by letting them stay in the country and potentially making them eligible for TPS, which has for years been granted to other Haitian refugees.

Schumer has seldom criticized the administration in public. But on Tuesday he called on Biden and Mayorkas to stop removals of Haitians and to stop expelling migrants because of Covid-19 concerns.

“We cannot continue these hateful and xenophobic Trump policies that disregard our refugee laws,” Schumer said in a speech on the Senate floor. “We must allow asylum seekers to present their claims at our ports of entry and be afforded due process.”

Congressional Black Caucus Chair Joyce Beatty and several other members of the group met Wednesday with top White House officials to raise their concerns and ask that the deportations stop. “We filled the room, and let me just say, we were not bashful,” she said.

Representative Carolyn Maloney, chair of the Committee on Oversight and Reform, and five other Democrats on the panel wrote a letter to the head of Customs and Border Protection protesting the treatment of migrants and asking that removals be stopped. Some of the White House’s more consistent Democratic critics, including Congresswomen Alexandria Ocasio-Cortez and Ilhan Omar, have also objected.

Biden hasn’t spoken publicly about the situation at Del Rio. He’s been briefed about the migrant flow and the horseback photos, according to White House Press Secretary Jen Psaki, but his focus this week has been on other areas of foreign policy, including resolving a diplomatic spat with France and talks with foreign leaders in the U.S. for the United Nations General Assembly.

Vice President Kamala Harris, whose portfolio includes addressing the root causes of migration to the U.S. southern border, has been closely involved in the administration’s handling of the situation, on Tuesday telling reporters that agents’ horseback intimidation of migrants was “horrible.” Harris spoke to Mayorkas on Wednesday, and her office issued a rare readout of a call among administration officials to show she’s engaged.

But the administration’s expression of outrage hasn’t assuaged Haiti and Democratic allies.

Edmond, the Haitian ambassador, expressed frustration at the Biden administration’s recent treament of him, saying that his request for a meeting with Mayorkas has been ignored.

“There is no respect whatsoever,” he said. “The State Department should have called the ambassador to say, ‘I am sorry about what happened, this looks bad and we are taking corrective action.’ But we have not received any calls from anyone.”

The State Department, the Homeland Security Department and the White House didn’t respond to requests for comment on Edmond’s remarks.