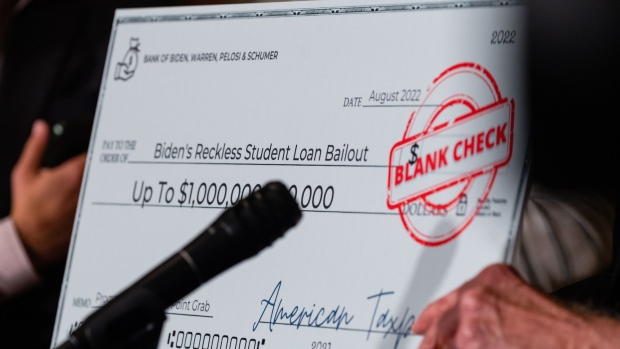 Biden last week asked the justices to lift a federal appeals court order that is now blocking the program, which the administration has said could affect more than 40 million people. The states say Biden exceeded his authority under a law that lets the Education Department forgive loans during national emergencies.

That law “requires a real connection to a national emergency,” the Nebraska-led group argued Wednesday. “But the department’s reliance on the COVID-19 pandemic is a pretext to mask the president’s true goal of fulfilling his campaign promise to erase student-loan debt.”

The administration says debt relief would ameliorate harms stemming from the pandemic, which former President Donald Trump declared a national emergency in 2020. Both administrations invoked the so-called HEROES Act to suspend payments and interest accrual on student loans.

The program would forgive as much as $20,000 in federal loans for certain borrowers making less than $125,000 per year or $250,000 for households. About 26 million people had requested forgiveness before the Department of Education stopped accepting applications.

The Biden administration has suggested the justices consider taking up the case without waiting for a final appeals court decision -- a schedule that could mean a definitive ruling by June.

The Biden team is fighting multiple challenges to the debt-relief program. The biggest issue for opponents has been establishing standing to sue -- that is, showing they are being directly harmed by the policy. In the case now before the high court, the 8th US Circuit Court of Appeals said the states had standing because of the impact on a Missouri loan servicer that has financial ties to that state’s treasury.

Missouri, Arkansas, Iowa, Kansas, and South Carolina are pressing the challenge alongside Nebraska.

The debt-relief plan has been on hold since Oct. 21, when the 8th Circuit issued an emergency order blocking the program.