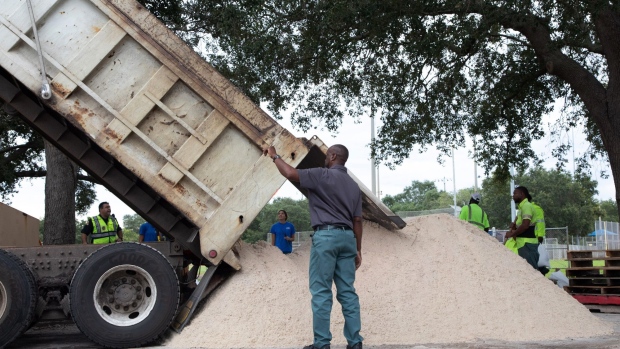 A truck deposits sand for sandbags ahead of Hurricane Ian in St. Petersburg, Florida, US, on Tuesday, Sept. 27, 2022. Ian made landfall over western Cuba as a major Category 3 hurricane, while churning toward Florida in what could be the worst storm to hit Tampa in over a century. , Bloomberg

DeSantis, a Republican and frequent critic of Biden and his policies, is a potential rival in the 2024 presidential election.

Biden and DeSantis discussed “the steps the federal government is taking to help Florida prepare for Hurricane Ian. The president and the governor committed to continued close coordination,” White House Press Secretary Karine Jean-Pierre said in a Twitter post.

On Tuesday night, DeSantis himself took to Twitter to warn residents. The storm “is expected to bring catastrophic flooding and life-threatening storm surge to large portions of the west coast” of the state, the governor said. “Listen to your local emergency officials and heed all evacuation orders to keep your families safe.”

The hurricane, projected to be among the costliest storms in American history, has already prompted mass evacuations, school shutdowns and thousands of flight cancellations across Florida, the third-largest US state.

The storm is forecast to gain power through Wednesday, bringing threats of 6-foot storm surges into Tampa Bay in Florida and heavy rains across the US Southeast.

The storm arrives as climate change has fueled extreme weather worldwide, including hurricanes that rapidly gain strength as they approach land.

Jean-Pierre did not elaborate on the conversation between DeSantis and Biden.

DeSantis and Texas Governor Greg Abbott have drawn criticism from Biden for sending migrants from their states to liberal enclaves. Biden earlier this month accused Republican governors, without naming the two, of using people “as props.”

His comments came after two planes dispatched by DeSantis flew dozens of migrants to Martha’s Vineyard, Massachusetts, and after buses sent by Abbott brought migrants to Washington, D.C.

DeSantis, who is running for re-election against Charlie Crist, a former governor, hasn’t said if he’ll enter the 2024 race. But he will be trying to achieve a convincing victory to maintain and enhance his national prominence, especially if former President Donald Trump declines to run.