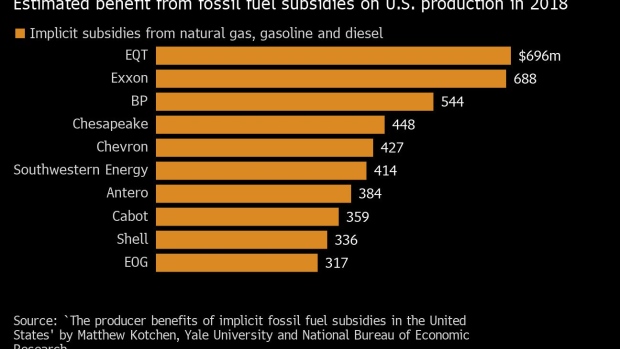 (Bloomberg) -- President Joe Biden’s plan to eliminate subsidies claimed by oil and gas companies and raise levies on corporate polluters would increase government receipts by $35 billion over the coming decade.

The benefits of these subsidies are currently concentrated “within a handful of large firms,” the Treasury said in the Made In America Tax Plan released Wednesday. The report expands on tax proposals in Biden’s $2.25 trillion economic package unveiled last week.

The plan is likely to meet stiff resistance from the oil and gas industry and its supporters on Capitol Hill. Biden already surprised many executives in the first few months of his presidency by canceling the Keystone XL crude pipeline and restricting drilling on federal land.

“The main impact would be on oil and gas company profits,” the Treasury said in the report. “Research suggests little impact on gasoline or energy prices for U.S. consumers and little impact on our energy security.”

Oil and gas producers benefit from elements of the tax code that allow them to deduct drilling costs early in a project’s life cycle and are able to carry forward losses for several years. Industry groups have claimed these measures are not specific to fossil fuels and are designed to encourage investment.

Even so, Biden’s tax plan was clear in its intention to single out the oil and gas industry, while providing a raft of incentives to clean energy, climate change resilience and carbon storage.

“Tax preferences for oil, gas and coal producers today decrease their tax liabilities relative to other firms,” the Treasury said. “Fossil fuel companies additionally benefit from substantial implicit subsidies, since they sell products that create externalities but they do not have to pay for the damages caused.”