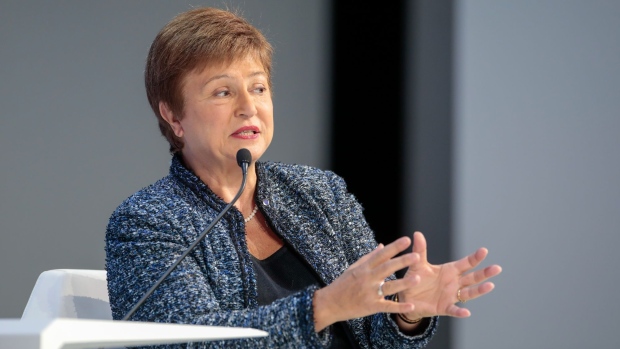 Kristalina Georgieva, managing director of the International Monetary Fund (IMF), gestures as she speaks during a panel session on the closing day of the World Economic Forum (WEF) in Davos, Switzerland, on Friday, Jan. 24, 2020. World leaders, influential executives, bankers and policy makers attend the 50th annual meeting of the World Economic Forum in Davos from Jan. 21 - 24. , Bloomberg

(Bloomberg) -- Treasury Department officials are debating whether the U.S., the International Monetary Fund’s largest shareholder, should ask Managing Director Kristalina Georgieva to resign amid an ethics scandal, people familiar with the situation said.

The Treasury’s deliberation continues as the Washington-based fund said its executive board met with Georgieva on Wednesday as part of its ongoing review of an investigation by law firm WilmerHale, commissioned by the World Bank. It alleged that she pressured bank staff to adjust a ranking in China’s favor while working there previously. She took the helm of the IMF in 2019.

The 24-member board “remains committed to a thorough, objective, and timely review and expects to meet again soon for further discussion,” the IMF said in a statement.

The people who spoke to Bloomberg News about the U.S.’s position declined to be identified because the discussions are private. Washington’s stance is key in the matter because it has the biggest share of the fund’s voting rights at 16.5%.

“There is a review currently underway with the IMF board and Treasury has pushed for a thorough and fair accounting of all the facts,” Treasury spokeswoman Alexandra LaManna said. “Our primary responsibility is to uphold the integrity of international financial institutions.”

The executive board’s meeting went on for about five hours, and the body is due to reconvene on Friday, where executive directors may arrive at a common position, another person said.

On Monday, the executive board met with WilmerHale, it said in a statement.

Some staff at the fund, which employs about 2,700 people, have lost confidence in Georgieva, several people familiar with the matter said.

The IMF didn’t immediately respond to an email seeking comment.