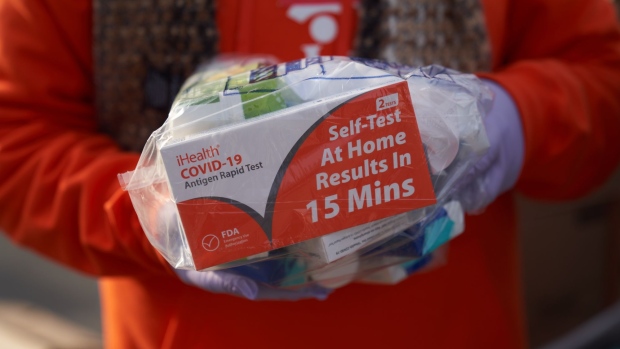 A volunteer hands out free Covid-19 at-home test kits with groceries at a food distribution site in Chelsea, Massachusetts, U.S., on Tuesday, Dec. 21, 2021. The Omicron variant has swiftly overtaken Delta as the dominant form of the coronavirus in Massachusetts, according to a new analysis by scientists at The Broad Institute of MIT and Harvard, now accounting for the majority of the cases here. , Bloomberg

(Bloomberg) -- The Biden administration on Wednesday will begin accepting orders for free at-home Covid-19 tests, the latest government response to a record number of infections.

Each U.S. household that asks for tests via CovidTests.gov, or by phone, will receive four kits drawn from a 500 million-test order approved by President Joe Biden in December.

The move comes as the fast-spreading omicron variant has caused demand for tests to spike, leaving many Americans facing long lines at testing centers and empty shelves at stores selling at-home kits.

The tests are just the first tranche being purchased by the federal government. Biden said Thursday that his administration will buy another 500 million tests. He pledged that the administration would “continue to work with the retailers and and online retailers to increase availability.”

The test purchases are among the steps the White House is taking to expand test availability. Federal testing sites have expanded around the country, and the administration is requiring private health insurers to pay for up to eight tests a month beginning Saturday.

The poll also found that among the one-in-five Americans who have acquired at-home tests, nearly half said they had difficult acquiring them.