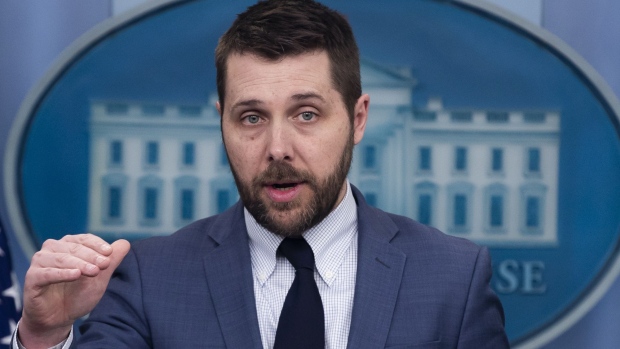 (Bloomberg) -- The White House is planning a post-midterms push for antitrust legislation that would rein in the power of the world’s largest tech companies, a last-ditch effort to get a stalled pair of bills through Congress before a predicted Republican takeover in January.

“We are very committed to moving ambitious legislation in this area,” Brian Deese, director of the National Economic Council, said in a phone interview.

The lame-duck period after Tuesday’s US election may be the last shot to pass the landmark legislation, the American Innovation and Choice Online Act and Open App Markets Act. The bills, which would prevent the tech companies from using their platforms to thwart competitors, would be the most significant expansion of antitrust law in over a century.

Even before the reinvigorated effort, tech companies have been grappling with economic uncertainty that has prompted them to freeze hiring and even cut entire departments. Shares of Amazon Inc. and Alphabet Inc. have fallen more than 40% this year, while Apple Inc.’s have fallen 23%. Meta Platforms Inc., meanwhile, lost about three-quarters of its value.

Republicans have made it clear that they won’t support the bills if they retake control of either chamber of Congress. That has supporters urging the White House to mount a push in the final weeks before a new Congress is seated early next year.

Advocates have criticized the White House for failing to prioritize the legislation, which major tech companies have spent more than $100 million to defeat. Alphabet’s Google, Amazon, Apple and Meta all oppose the bill.

“There is bipartisan support for antitrust bills, and no reason why Congress can’t act before the end of the year,” said White House spokesperson Emilie Simons. “We are planning on stepping up engagement during the lame duck on the president’s agenda across the board, antitrust included.”

Versions of both bills have made it through committees but await action by the full House and Senate. If Congress doesn’t act before the end of the year, it will likely be years before lawmakers pass any legislation to crack down on the power of the tech giants.

Ultimately, the future of the bills lies with Senate Majority Leader Chuck Schumer, who will decide whether to bring the measures to a vote before the end of the year. Advocates hope that the White House will specifically focus its outreach on him.

“It is great to see the White House leaning into important and popular legislation, and we now have a real chance to get it over the finish line,” said Alex Harman, director of government affairs at anti-monopoly group Economic Security Project.

The White House has issued statements in support of the trust-busting legislation. However its congressional affairs team, which has brokered several bipartisan legislative packages during President Joe Biden’s tenure, has remained notably hands-off, according to supporters and congressional aides familiar with the White House’s outreach.

Evan Greer, director of advocacy group Fight for the Future, launched a petition in mid-October urging the White House to put its weight behind the bills during the final stretch of this congressional session.

“I don’t think the White House understands how embarrassing and bad this looks if Democrats, while they’re in control of House, Senate and White House, fail to do anything about big tech,” Greer said. “We’re coming up on the clock running out.”

Deese, the NEC director, disputed assertions that the White House hasn’t been involved.

“This has been a process where we have, at every stage, tried to understand where the leaders on the Hill were pushing, what was going to be necessary to maintain bipartisan support for these pieces of legislation and how we can most constructively engage and weigh in,” Deese said.

The bills have advanced much farther than lobbyists and advocates expected thanks to a bipartisan coalition that brought together odd couples such as Minnesota Democratic Senator Amy Klobuchar and Iowa Republican Senator Chuck Grassley.

Jeff Hauser, executive director of government ethics group Revolving Door Project, said he believes the White House has been “slow-walking” the tech legislation –– a situation that he said he had anticipated when Biden nominated Louisa Terrell, a tech industry veteran, to run his congressional outreach.

“The Biden administration has not made the tech bills a priority,” Hauser said.

Terrell has garnered a reputation for brokering complex deals, including the infrastructure law signed earlier this year and the Inflation Reduction Act. But Terrell has rarely mentioned the antitrust legislation during outreach to Capitol Hill, at times pivoting the conversation to data privacy or other tech issues, according to several congressional aides who have met with her and asked not to be identified discussing private conversations.

The White House said Terrell has been supportive of the legislative effort since the start, rejecting any claims that she was disengaged. Terrell didn’t reply to a request for comment.

Terrell worked as a Facebook lobbyist between 2011 and 2013, helping to set up the social media company’s Washington presence in its early chapters. She also worked for New Jersey Democratic Senator Cory Booker, the Federal Communications Commission and McKinsey & Company.

Terrell’s defenders refuted any implication that she sides with big business because she worked for large companies, noting that during her time at the helm of the White House’s congressional affairs office, she has helped push policies opposed by rich industries including oil and gas and pharmaceuticals.

President Joe Biden has elevated the issue of trust-busting, specifically against the tech giants, more than any other president in recent memory. He appointed a trio of antitrust progressives to key roles at the White House, Federal Trade Commission and Justice Department. Last year, Biden signed a sweeping pro-competition executive order, which required agencies across the federal government to investigate and take action against corporate consolidation in industries including agriculture, healthcare and tech.

“President Biden is the most pro-competition president we’ve had in a generation and he and his administration have strongly supported this bipartisan legislation,” said Rhode Island Representative David Cicilline, the lead Democratic co-sponsor of the bills in the House. “We will be working around the clock with the White House to get it across the finish line during the final weeks of the Congress.”