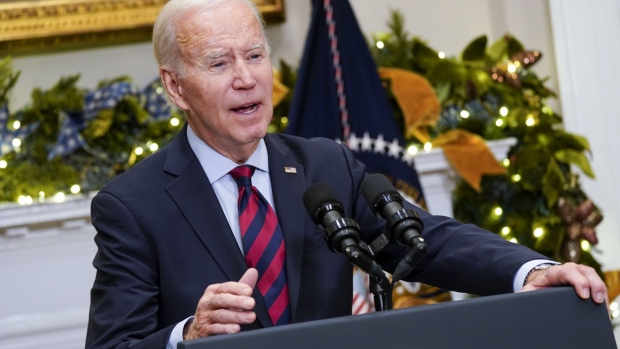 (Bloomberg) -- President Joe Biden announced a $36 billion bailout for the Central States Pension Fund, one of the nation’s biggest multi-employer plans, touting the help for union workers and retirees as he looks to mend ties with organized labor after a contentious rail deal.

The money would “prevent drastic cuts to workers’ hard-earned pension benefits, cuts that have been scheduled to occur within the next few years,” Biden said at the White House on Thursday. “It’s not going to happen — the cuts are not going to occur.”

The event — where Biden was joined by International Brotherhood of Teamsters President Sean O’Brien and AFL-CIO President Liz Shuler, as well as Labor Secretary Marty Walsh — gave the president an opportunity to try to ease frictions with labor groups after he forced a contentious contract on freight-rail workers last week.

Biden said the aid would help 350,000 union workers and retirees, who would have faced benefit cuts estimated at 60% over the next few years.

The president angered some unions by signing legislation imposing a deal he helped to negotiate between freight railroads and their workers, averting a possible strike that threatened to cripple the economy. Rank-and-file union workers opposed the contract. Four of the 12 unions involved in the negotiations — representing roughly 54,500 workers — rejected the deal.

The president called the decision “tough for me” at a signing ceremony and said labor would need to wait to obtain more sick leave, a key sticking point in talks. Biden has dubbed himself the most pro-union president in US history, and labor activists have long proved to be key political allies for the president and fellow Democrats.

The White House touted the assistance Thursday as “the largest-ever award of federal financial support for worker and retiree pension security” and the largest from a program allowing some financially troubled multi-employer plans to apply for assistance under Biden’s pandemic relief law, the American Rescue Plan.

Biden said the measure “shored up the pension plans for millions of union workers, and represents the most significant investment and pension security for union workers and retirees the past 50 years.”

Republicans have criticized the pension bailout provision of Biden’s relief law, saying it had nothing to do with the pandemic and was simply a handout to the president’s union allies.

Biden spoke about the challenges faced by multi-employer plans.

“Over the years due to changing economic trends, persistent attacks on unions, over 200 of these multi-employer plans were facing potential insolvency,” he said. “That meant 2 to 3 million workers, through no fault of their own — they kept their end of the bargain — faced painful cuts to the benefits they were counting on retirement.”

Many pension funds have struggled as fewer workers pay in and older workers retire, threatening retirement holdings. Pensions have grappled with cutting payments or increasing employee contributions. Multi-employer funds, such as Central States, also have the added burden of looking after so-called orphan retirees from bankrupt member companies.

--With assistance from Nancy Cook.