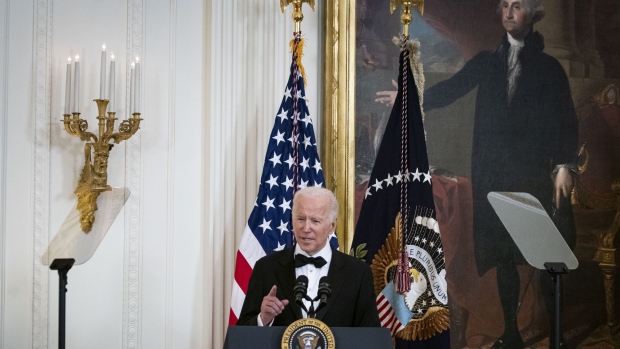 (Bloomberg) -- Joe Biden will speak with key European leaders later Monday as countries seek to project a united front on Ukraine ahead of the U.S. President’s video call on Tuesday with Russia’s Vladimir Putin.

Biden wants the discussion among the North Atlantic Treaty Organization’s so-called Quint countries (the U.S., Germany, Italy, France and the U.K.) to further show Putin there is a collective determination to steer him off any plan to invade Ukraine, according to a person familiar with the plans who asked not to be identified talking about confidential matters.

The U.S. and its European allies are working on a package of measures and sanctions to serve as a deterrent for Russia. Biden has said he is putting together “the most comprehensive and meaningful set of initiatives to make it very, very difficult for Mr. Putin to go ahead and do what people are worried he may do.”

The U.S. has shared intelligence with NATO allies suggesting that Russia has plans in place that would allow for a rapid large-scale incursion into Ukraine from multiple locations in the early months of 2022, according to people familiar with the discussions. The plans would involve about 100 battalion tactical groups, roughly double the number currently positioned near Ukraine’s borders, according to the intelligence.

White House Press Secretary Jen Psaki, speaking in a Monday, said Biden would speak with “transatlantic partners” later in the day, but didn’t specify which ones. The U.S. objective is to convey diplomatically that “this is the moment for Russia to pull back” at the Ukraine border, she said.

“We are going to continue to coordinate closely with our partners, our transatlantic partners, on a range of economic sanctions and steps that can be taken should President Putin decide to move forward,” she said.

The U.S. has also registered an exponential rise in disinformation targeting Ukraine but says it doesn’t know what the Russian president’s intentions are and whether he has made a decision yet, according to the people. The Kremlin has denied it wants to invade Ukraine again and accuses NATO of moving to hem Russia in on its western periphery.

Announcing the call with Putin, the White House said over the weekend  that “President Biden will underscore U.S. concerns with Russian military activities on the border with Ukraine and reaffirm the United States’ support for the sovereignty and territorial integrity of Ukraine.”

Biden is expected to convey to Putin similar concerns and worries to those passed on by Secretary of State Antony Blinken to Russian Foreign Minister Sergei Lavrov in Sweden last week.

Two European diplomats told Bloomberg that Russia has shown no signs of de-escalating yet, though one added that the window to dissuade Putin from a devastating escalation was still open.