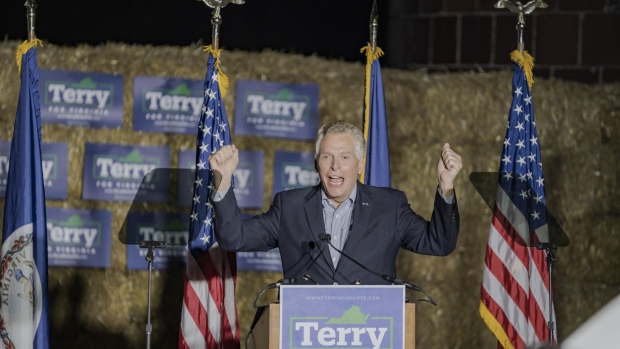 Terry McAuliffe, Democratic gubernatorial candidate for Virginia, gestures as he speaks during a campaign event in Henrico, Virginia, U.S., on Friday, Oct. 15, 2021. Virginia will elect a new governor on Nov. 2, and the contest, between McAuliffe and Republican Glenn Youngkin, may foreshadow midterm congressional elections in 2022. , Bloomberg

(Bloomberg) -- President Joe Biden will appear in Virginia next week with the Democratic gubernatorial candidate Terry McAuliffe as polls show him and his Republican opponent, Glenn Youngkin, in a dead heat, the McAuliffe his campaign said Thursday.

Biden is scheduled to appear alongside McAuliffe, a former governor of Virginia and also a former chair of the Democratic National Committee, on Tuesday in Arlington. That will be the second time the president will have campaigned with McAuliffe, who has seen his lead in polls against Youngkin, a former co-chief executive officer of Carlyle Group Inc., dwindle.

A Monmouth University poll released Wednesday found the two tied at 46%, with less than two weeks until the election. Earlier this month, McAuliffe cast Biden and his party’s lawmakers in Congress as a liability in the final weeks of the campaign, saying that the president is “unpopular” in Virginia.

But with a tight race, Democrats are trying to generate turnout among faithful voters. Vice President Kamala Harris is set to appear with McAuliffe Thursday evening in Dumfries. Former President Ba rack Obama is scheduled to headline a rally on Saturday. And former Georgia gubernatorial candidate and voting rights activist Stacey Abrams is slated to campaign for McAuliffe in Virginia this weekend after doing so last weekend.