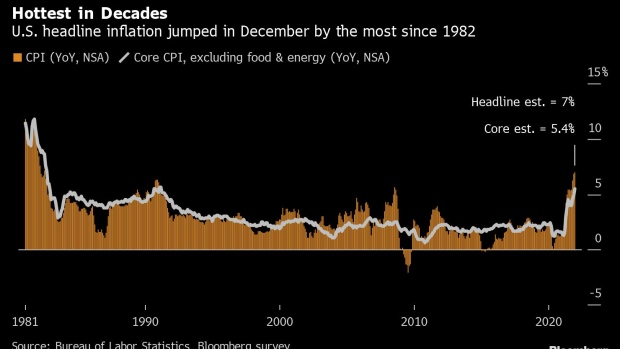 (Bloomberg) -- Joe Biden limps into his second year facing a cascade of perils, at home and overseas, as well as the prospect his party will lose control of Congress in November’s midterm elections.

He’ll hold a formal news conference Wednesday, aiming to defend his record in the White House so far and lay out his plans for the new year on the eve of the anniversary of his inauguration.

The president inherited the pandemic, and in his first months accelerated the U.S. vaccination campaign while spending political capital to win $1.9 trillion in relief for virus-stricken Americans. But he’s getting little love from voters for staving off a recession, as they contend with soaring energy and food bills while the omicron variant of the coronavirus surges across the country.

At the same time, Russia is poised to spark Biden’s worst foreign policy crisis yet with a potential invasion of Ukraine.

Here’s a look at the highs and lows of his presidency so far.

The omicron variant of coronavirus has set new U.S. records for daily cases and hospitalizations while pushing the American death toll over 850,000. The White House was caught flat-footed, with even Democratic allies complaining the administration wasn’t prepared for a spike in demand for testing.

The Supreme Court, meanwhile, gutted Biden’s best hope to get shots in the arms of American holdouts, blocking a rule that would require large employers to impose vaccine mandates or weekly testing on their workers.

The president’s advisers are planning for the virus to potentially become endemic, and his latest attempt to navigate the crisis revolves around shipping Americans millions of free test kits and masks.

Biden’s tanking approval ratings are tied, at least in part, to surging inflation. Consumer prices were up 7% in December from a year earlier, the largest 12-month gain in nearly 40 years. A combination of factors are to blame, including snarled supply chains, capacity constraints and tremendous American demand for goods.

But following massive job losses when the pandemic began in 2020, the U.S. added a record 6.4 million jobs in 2021, and the unemployment rate fell sharply to 3.9%, well below forecasts. Biden’s sought to claim credit for the job market, but higher prices have voters anxious about his leadership.

Among post-World War II presidents elected to their first terms, only Donald Trump had a lower average approval rating in his first year, according to Gallup.

The White House hopes to revive talks on a slimmed-down package, but so far Manchin hasn’t appeared willing to re-engage. And any new legislation could struggle to pass the House, where some Democrats insist on provisions that could make a final deal difficult to strike.

Without an agreement, Biden risks unenthusiastic Democratic voters sitting out the midterm elections.

Money should start flowing to states soon, and Democrats plan to aggressively highlight so-called shovel-ready projects in swing districts before the midterms. Yet the legislation hasn’t yet shown up in Biden’s polling numbers, and it’s unclear whether enough projects can get underway by November to make an impression on voters.

Biden had hoped to parlay the anniversary of the Jan. 6 attack on the U.S. Capitol and the Martin Luther King Jr. holiday to rally Senate Democrats to pass voting rights legislation by weakening the chamber’s filibuster rules. But Senator Kyrsten Sinema of Arizona, another moderate Democrat, publicly rejected the appeal, while Republican leaders accused the president of fear-mongering.

Some voting rights activists refused to appear alongside Biden at a speech in Atlanta promoting the effort, criticizing him for prioritizing his economic agenda over voting rights.

The failure could resonate poorly in November for a president who relied on Black voters to carry him to the White House.

Biden has stumbled on the international stage, and never fully recovered from his hasty and bloody withdrawal from Afghanistan. Rather than garnering praise for ending America’s longest war, the chaotic departure infuriated U.S. allies and saw 13 U.S. service members killed in a suicide bombing, raising questions about his administration’s planning and intelligence-gathering.

More recently, the Kremlin’s buildup of troops on the border with Ukraine has heightened fears of an imminent invasion that could throw Europe into chaos. Another major setback overseas would provide Republicans a fresh cudgel as they seek to portray Biden as weak and ineffectual in confrontations with adversaries.

The Afghanistan withdrawal, rapidly escalating tensions with Russia and domestic troubles have drawn White House attention from China, which Biden’s repeatedly described as the U.S.’s top competitor in the world. The relationship between the world’s two largest economies has deteriorated since Biden took office, and a November virtual summit between the American president and China’s Xi Jingping produced no breakthroughs.

The U.S. subsequently announced a diplomatic boycott of the Beijing Olympics next month, withholding the customary delegation of top officials while allowing American athletes to compete.

Biden’s handling of the crisis in Ukraine risks emboldening the Chinese government and military as they confront Taiwan, regarded in Beijing as a breakaway province.