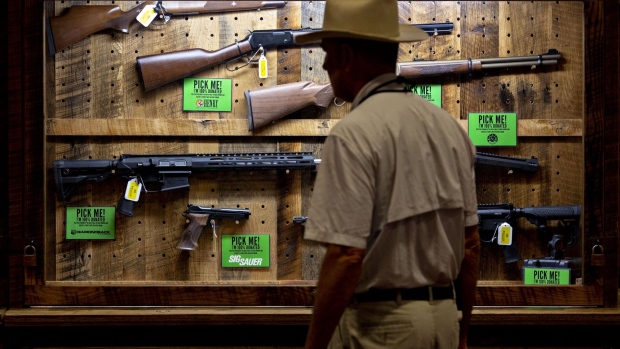 An attendee looks over a display case of guns being raffled ahead of the National Rifle Association (NRA) annual meeting at the Indiana Convention Center in Indianapolis, Indiana U.S., on Thursday, April 25, 2019. President Donald Trump will speak at the NRA Institute for Legislative Action (NRA-ILA) Leadership Forum on Friday. Photographer: Daniel Acker/Bloomberg , Bloomberg

(Bloomberg) -- President Joe Biden on Thursday will announce that he’s taking executive actions to tighten gun restrictions, including stopping the proliferation of so-called ghost guns, according to administration officials.

Currently people can buy kits that contain the components and directions to put together firearms in as little as 30 minutes, one of the officials said, and using them to commit crimes. The weapons, known as ghost guns, can’t be traced by law enforcement because they don’t have serial numbers.

Biden has been under pressure to address gun violence since shootings last month at a supermarket in Boulder, Colorado, and at spas in Georgia. Biden has urged lawmakers to pass gun-control measures that are widely opposed by Republicans.

Biden’s action on Thursday will tell the Justice Department, within 60 days, to issue a proposed rule making clear that when a stabilizing brace is used to effectively turn a pistol into a short-barreled rifle, it is subject to the requirements of the National Firearms Act. The suspect in the Boulder shooting, in which 10 people were killed, used a pistol with an arm brace, according to the authorities, making the weapon more stable and accurate.

Biden also will announce that he’s allocating funds for community violence intervention and prevention programs. Such programs have been established in urban communities with the goal of heading off conflicts that can lead to violence and helping people at risk of committing offenses. Biden has proposed $5 billion over eight years for community intervention funding as part of his American Jobs Plan.

The administration will use money that it currently has to begin the intervention effort. Five federal agencies are making changes to 26 different programs to direct support to community violence programs. The Justice Department will publish within 60 days model red flag legislation for states. That would allow people to petition courts to remove firearms from people who present a danger to themselves or others, the official said.

Also last month, a gunman killed eight people at spas, six of whom were Asian women, during a series of shootings at spas in the Atlanta area.

Still, the measures show the limitations of the president’s authority to address gun control. Biden will continue to call on Congress to enact tighter gun restrictions, but Republican lawmakers have been opposed to most initiatives and a sharply divided Senate is unlikely to take up the issue, which has long stirred fierce partisan debate.

The Justice Department will also issue a report on firearms trafficking.

An administration official emphasized that this is an initial set of actions from Biden to address gun control.

Biden plans to nominate David Chipman, a gun control advocate, to lead the Bureau of Alcohol, Tobacco, Firearms and Explosives, according to the White House.

Chipman is a senior policy adviser at Giffords, an organization led by former Congresswoman Gabrielle Giffords, an Arizona Democrat who was gravely wounded injured in a 2011 shooting near Tucson that killed six other people, including a federal judge. The group focuses on tightening gun control measures.