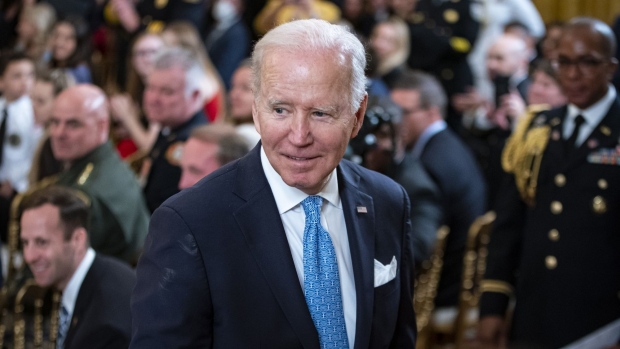 US President Joe Biden departs during an event to award the Public Safety Officer Medals of Valor in the East Room of the White House in Washington, D.C., US, on Monday, May 16, 2022. The Medal of Valor is awarded to public safety officers who have exhibited exceptional courage, regardless of personal safety, in the attempt to save or protect others from harm, according to the White House. , Bloomberg

(Bloomberg) -- President Joe Biden will launch a long-awaited economic initiative for increasing US involvement in Asia in the coming days during his trip to the region, according to one of the cabinet officials leading the initiative.

The US and its partners will kick off the Indo-Pacific Economic Framework when Biden visits Japan on a May 20-24 trip that also will take him to South Korea, Commerce Secretary Gina Raimondo said.

The Commerce Department is leading negotiation of pillars of the framework focused on supply-chain resilience; clean energy, decarbonization and infrastructure; and taxation and anti-corruption. The US Trade Representative’s office is leading the work on fair and resilient trade. The administration also has been working to include digital issues like data localization and cross-border data flows.

The IPEF is part of the Biden administration’s efforts to counter China’s clout in Asia, following the US’s withdrawal from talks on the Trans-Pacific Partnership regional trade agreement under former President Donald Trump.

“We do we have a great deal of enthusiasm about this,” Raimondo told reporters on a virtual call on Tuesday. “I have spent a lot of time talking to our counterparts in the Indo-Pacific, and there’s a large demand by them for the United States to be more present and to have an affirmative economic strategy.”

Raimondo announced work on the plan in November after talks with Australia, New Zealand, Singapore, Malaysia and Japan.

Some details of the IPEF are hazy and the Biden administration has stressed it won’t include lower tariffs or better access to US markets. Some in Congress have criticized the plan as lacking substance, with senators from both parties blasting Biden’s trade agenda at a March hearing and grilling US Trade Representative Katherine Tai over a shortage of ambition to negotiate new agreements.