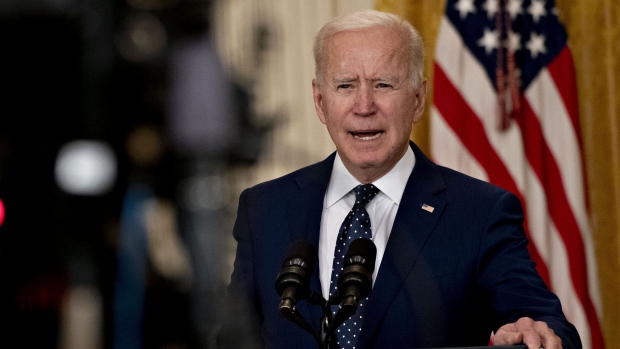 U.S. President Joe Biden speaks in the East Room of the White House in Washington, D.C., U.S., on Thursday, April 15, 2021. The Biden administration imposed a raft of new sanctions on Russia, including long-feared restrictions on buying new sovereign debt, in retaliation for alleged misconduct including the SolarWinds hack and efforts to disrupt the U.S. election. , Bloomberg

(Bloomberg) -- President Joe Biden will seek to parlay his administration’s successes battling the coronavirus into support for broad new federal spending -- on infrastructure, education and other Democratic priorities -- in a Wednesday night address to a joint session of Congress.

Biden will unveil his American Families Plan, a $1.8 trillion package of tax credits and domestic priorities including child care, paid family leave, and tuition-free community college that would be funded in part by the largest tax increases on wealthy Americans in decades.

He’s expected to tout his previously proposed $2 trillion infrastructure bill and try to build popular support for police reform, gun control and immigration proposals that have languished on Capitol Hill.

Biden’s address will celebrate a coronavirus vaccine rollout that’s delivered more than 315 million shots and a stimulus program that provided more than 160 million checks to taxpayers.

But aides and allies say Biden views his speech as much about selling a broad vision to the American public as it is a pitch to lawmakers on any particular legislative program. The president, they say, sees the nation’s emergence from the pandemic as a unique opportunity to persuade voters that the country is more united and that government can help ordinary Americans.

Biden will look to frame both his accomplishments and aspirations as an implicit rebuttal of the disarray that defined the federal government during the Trump administration, eroding confidence in the nation’s ability to meet big challenges.

The speech will be a “call to action” for solving the crises the nation faces and seek “to prove our government can deliver again,” White House Chief of Staff Ron Klain said Thursday during an event at Georgetown University.

Biden will stride to the House rostrum having attended more joint session addresses than any previous president: eight times as vice president and dozens more as a senator. But Wednesday’s will be unlike any in the nation’s past. Two women -- Vice President Kamala Harris and House Speaker Nancy Pelosi -- will sit over his shoulder as he addresses the American people.

Biden is expected to paint the gathering as a symbol of renewal after the Jan. 6 insurrection at the U.S. Capitol in which supporters of former President Donald Trump breached the House chamber where he will speak. Before addressing the nation, Biden plans to meet with workers who were in the building as rioters sought to disrupt the certification of Biden’s electoral victory.

Other elements of the evening may only serve to emphasize how far the nation still has to go in battling the coronavirus pandemic. Pelosi limited the number of attendees for the event to around 200 people on the advice of medical experts, less than a fifth of the normal attendance.

Members of Congress won’t be allowed to invite guests, and the first lady’s box -- where presidents traditionally position a group of Americans who help illustrate the need for policies outlined in the speech -- will be empty.

Instead, the first lady held a “virtual reception” Wednesday afternoon with a guest list that hinted at elements of the president’s speech: a child migrant who became a nurse on the front lines of the pandemic, gun control and transgender rights activists, the director of a child care center for at-risk children, and an information technology worker focused on bringing broadband access to rural Native American communities.

Chief Justice John Roberts will be the only representative of the Supreme Court, while just two cabinet officials -- Secretary of State Antony Blinken and Defense Secretary Lloyd Austin -- will attend. Biden is expected to don a face mask as he’s introduced for the traditional walk up the center aisle of the House chamber.

White House officials also credited the pandemic for the timing of Biden’s address, which the president had initially pledged to hold during his first month in office. Instead, aides on both sides of Pennsylvania Avenue struggled to sort the logistics of the traditionally standing-room-only event as conditions rapidly shifted with lawmakers receiving vaccines -- and Biden’s stimulus legislation took longer than expected to pass both chambers of Congress.

The delay in some ways proved fortuitous, allowing the president to highlight accomplishments that enjoy broad support among voters. Nearly two-thirds of Americans approved of Biden’s coronavirus relief package, 64% support his handling of the pandemic, and 58% back his plan to raise corporate tax rates to pay for infrastructure investments, according to an ABC News poll released Monday.

“The timing gives him an opportunity to take a victory lap not for victory’s sake, but to prove the concept that government can work right for the people,” said Liz Allen, a former Biden aide.

By delaying the speech, Biden can use one of the biggest bully pulpits provided to a president to tout spending plans that satisfy his party’s restless left flank. Promoting the initiatives will help shield Biden from criticism if the package ends up losing signature components at the hands of moderates like Senator Joe Manchin of West Virginia, or in negotiations with Senate Republicans.

The White House walked away from its call for a $15 an hour minimum wage when the Senate parliamentarian ruled it would not satisfy the requirements to bypass the 60-vote filibuster threshold during negotiations over the first stimulus bill, and the White House has already begun engaging GOP members on their scaled-back infrastructure proposals.

“It already kind of put the wind at his back, as opposed to going into Congress, kind of in the rush of the honeymoon with a lot of rhetoric, but no accomplishments,” said Lara Brown, a political science professor at George Washington University.

After the address, Biden will follow in the path of his predecessors by taking his message directly to voters. He plans visits to key swing states to amplify his proposals. The president, Harris, their spouses and cabinet members plan to visit approximately a dozen states. That includes Biden’s trip Thursday to Atlanta, where he’s expected to hold a car rally to celebrate his 100th day in office.

The following day, he’ll visit Philadelphia to celebrate the 50th anniversary of Amtrak -- expected to receive a sizable funding increase under his infrastructure plan -- at the city’s 30th Street Station. Georgia and Pennsylvania marked key electoral victories for Biden in November after they had voted for former President Donald Trump in 2016.