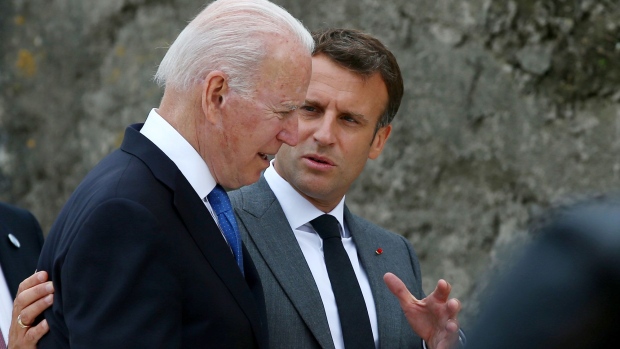 (Bloomberg) -- President Joe Biden said he will meet with French President Emmanuel Macron in October after causing a rift with the country by allowing Australia to acquire nuclear-powered submarines, scuttling a $66 billion deal with France.

Biden, seeking to repair relations with a close ally, held a phone call with the French president on Wednesday, the first time the two leaders spoke since the submarine deal was announced last week as part of a broader defense agreement between the U.S., U.K. and Australia. Biden said he’d meet with Macron in Europe.

Macron decided that the French ambassador to the U.S. -- who’d been recalled because of the sub deal -- will return to Washington next week.

After the agreement became public last week, French officials retaliated against the U.S., openly criticizing the Biden administration for blindsiding them, and asking that a summit between the U.S. and European Union scheduled for later this month be postponed. The White House has said it was Morrison’s obligation to inform France he was ending their deal for diesel-powered subs.