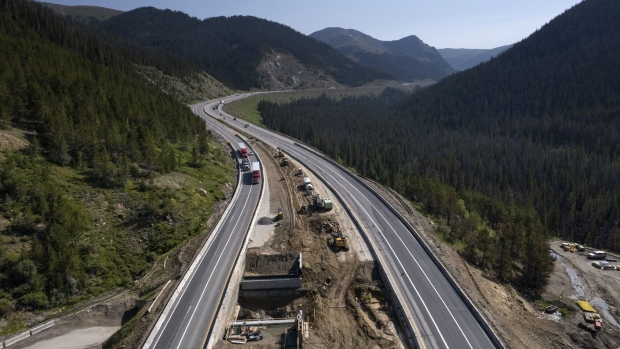 A construction crew works on replacing an underpass on Interstate 70 in Dillon, Colorado, U.S., on Thursday, July 15, 2021. Lawmakers have been battling for months to move ahead with an infrastructure package to improve the nation's ailing roads, bridges and transit systems. , Bloomberg

(Bloomberg) -- President Joe Biden will meet with key moderate Senator Joe Manchin and Senate Majority Leader Chuck Schumer in Delaware on Sunday as he pushes to finalize his up to $2 trillion tax and spending plan, a person familiar with the meeting said.

The rare Sunday meeting comes as the president and top Democrats push to have a framework agreement on the economic bill by the end of the day. Democrats have said they hope that an agreement in principle on the bill will allow the House to vote this week on a separate $550 billion physical infrastructure bill that has been held up by progressives wanting the deal on the larger bill.

The White House and Manchin still differ on the terms of the top-line spending level for the bill, which creates and expands programs aimed at helping women, minorities, children and the elderly.

Manchin, who represents West Virginia, has talked about a $1.5 trillion spending level while Biden has recently advocated for something in the range of $2 trillion. The original House-passed framework totaled $3.5 trillion.

There’s also a question of whether the bill will include an expansion of Medicare for dental, vision and hearing benefits, as well as whether a plan for paid family leave will be scaled down or left out of the package.

The types of tax increases to be used to pay for the new spending are also in flux, with a billionaires’ tax gaining momentum and corporate tax rate increases fading.

Sealing a deal with Manchin could allow Biden to pivot to the other hold out: Senator Kyrsten Sinema of Arizona. Sinema has been a sharp critic of plans to raise tax rates and instead favors other mechanisms including a possible stock-buybacks tax.