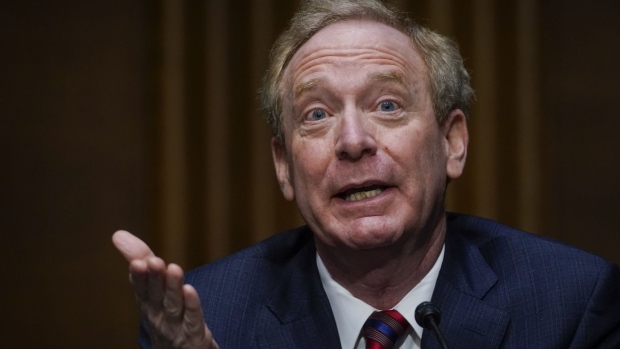 Bob Chapek, chief executive officer of Walt Disney Co., wears a protective mask during the reopening of the Disneyland theme park in Anaheim, California, U.S., on Friday, April 30, 2021. Walt Disney Co.'s original Disneyland resort in California is sold out for weekends through May, an indication of pent-up demand for leisure activities as the pandemic eases in the nation's most-populous state. , Bloomberg

(Bloomberg) -- President Joe Biden will meet with executives who’ve taken steps to require employees to be vaccinated against Covid-19, as the president touts his push for businesses across the U.S. to drive a new wave of inoculations.

Biden will meet at the White House on Wednesday with Brad Smith, president of Microsoft Corp.; Bob Chapek, chief executive officer of The Walt Disney Company; Roz Brewer, CEO of Walgreens Boots Alliance Inc.; Tim Boyle, president and CEO of Columbia Sportswear Co.; Greg Adams, chair and CEO of Kaiser Permanente, and others, according to an official familiar with the meeting, who spoke on condition of anonymity.

Biden will emphasize that businesses that have required Covid-19 shots have seen sharp increases in vaccination rates in short periods of time, the official said. White House officials hope the event serves as a rallying cry for other workplaces, the official said.

Biden’s guests have taken a series of different steps -- for instance, Microsoft is requiring vaccinations for people entering the company’s offices, while Walgreens requires shots for office staff and is working to expand that mandate, the official said.

Biden last week announced that he would require all federal employees and contractors to get vaccinated, expanding a rule that previously offered a testing alternative. He also announced that the Department of Labor would develop a workplace safety rule requiring that companies with 100 or more employees either require vaccination or offer weekly testing. That rule is still in development, and it’s not clear when it will take effect.