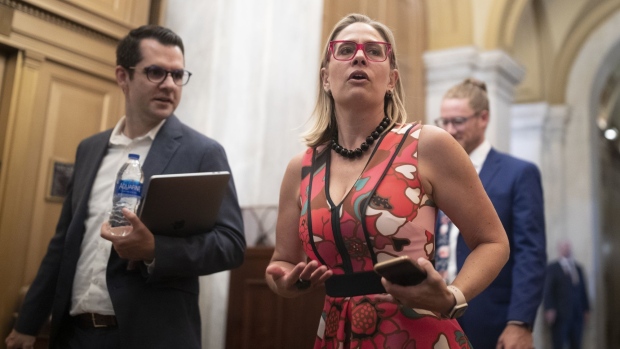 Senator Kyrsten Sinema, a Democrat from Arizona, speaks with members of the media while arriving for an infrastructure meeting in Washington, D.C., U.S., on Tuesday, July 20, 2021. The Senate majority leader cemented plans for a Wednesday cliff-hanger vote on whether to begin debate on a $579 billion infrastructure plan that does not yet exist. , Bloomberg

The Arizona senator is heading to the White House, according to people familiar with the matter, as Democrats and Republicans have been unable to resolve differences over transit funding, spending levels on water projects, whether all federally-backed projects should pay so-called prevailing wages and how much unspent Covid-19 money can be used to pay for infrastructure, among other disputed items.

Sinema and Biden will discuss the recent negotiations and how close they are to wrapping up, according to one person, who asked for anonymity because the meeting isn’t public. Politico reported earlier that Sinema would meet with the president.

The negotiations have blown past several deadlines for reaching a deal, despite persistent expressions of optimism from lawmakers in both parties that they were close to an agreement. Senate Majority Leader Chuck Schumer of New York has warned that he’ll keep the Senate in session through the weekend if necessary.

“There will always, always be details that have to be worked out, but I’m pretty optimistic at this stage,” Utah Republican Senator Mitt Romney, a member of the bipartisan group, said. “Nothing’s 100%, but it looks pretty good.”