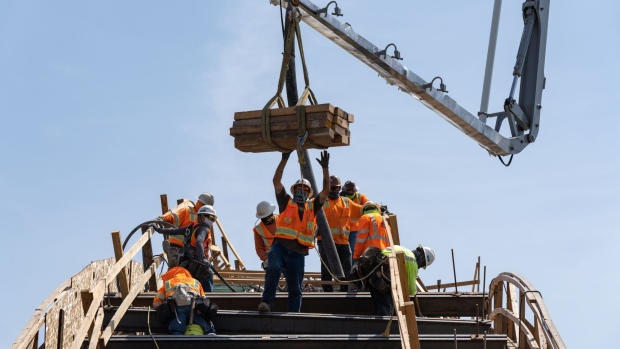 A Skanska AB construction worker guides a crane carrying lumber as a concrete boom pours concrete on the Sixth Street Viaduct replacement project in Los Angeles, California, U.S. on Tuesday, April 6, 2021. The Ribbon of Light is the name of the ten arches that will make up the new Sixth Street Viaduct connecting downtown L.A.'s Arts District with Boyle Heights. Photographer: Bing Guan/Bloomberg , Bloomberg

(Bloomberg) -- President Joe Biden will promote his $2.25 trillion infrastructure plan in a White House speech on Wednesday, and is expected to describe its passage as urgent to keep the U.S. competitive against China.

Ahead of his remarks, two of his top aides argued that the plan -- criticized by many congressional Republicans for including corporate income taxes -- enjoys broad support from ordinary Americans and is overdue after decades of under-investment in roads, child care and other programs.

“It’s necessarily large, because frankly, we’re behind,” Commerce Secretary Gina Raimondo told reporters at a White House briefing. “And we’ve neglected for too long important investments in our infrastructure. We need to ensure that investments in infrastructure, advanced manufacturing, workforce development and our care economy are made at the scale we need and are made in every single community in America.”

White House Press Secretary Jen Psaki declared that “the evidence is unanimous that the American people support” Biden’s vision for the U.S. economy, citing initial polling around the infrastructure plan.

Biden seeks to pressure lawmakers to back the proposal by rallying support from voters. Republicans have balked at the level of spending the president proposed and the plan’s priorities, including hundreds of billions of dollars for child and elderly care, in addition to objections over the tax increases.

Biden has said the pandemic exposed economic inequities that left millions struggling, especially people of color, and that the infrastructure plan needs to go far beyond roads and bridges, as some lawmakers would prefer.

Biden will host lawmakers in the Oval Office to exchange views on the plan, Psaki said. But the White House is also prepared to use a budget measure called reconciliation that would allow Democrats -- as long as they stay unified in the 50-50 Senate -- to pass a bill without any Republican support.

The president already faces some dissension among Senate Democrats. Progressives want the plan to be bigger, while moderates such as Senator Joe Manchin of West Virginia oppose raising the corporate tax rate to 28% from 21%, as Biden has outlined. Manchin favors a corporate rate of 25%.

GOP lawmakers have complained Democrats disregarded their views on the $1.9 trillion pandemic-relief bill that Biden signed last month. They said they want to avoid that outcome with the infrastructure package and that they want it to focus on traditional transportation projects.

White House aides have said they want Congress to make significant progress on an infrastructure bill by Memorial Day. House Transportation and Infrastructure Committee Chair Peter DeFazio said Tuesday his panel aims to complete work on its piece of the legislation “probably” in the third week of May.