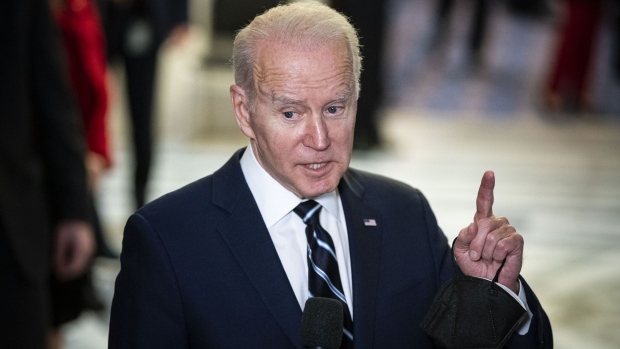 U.S. President Joe Biden speaks to members of the media after a meeting with the Senate Democratic Caucus in Washington, D.C., U.S., on Thursday, Jan. 13, 2022. Biden said he still hopes to win passage of voting rights legislation, which is headed to almost certain defeat, and that he'll continue trying if lawmakers vote it down. , Bloomberg

(Bloomberg) -- President Joe Biden is expected to announce on Friday the distribution of more than $5 billion to repair or replace bridges across the U.S., part of a program that the White House hailed as the largest investment of its kind “since the construction of the interstate highway system.”

The funds, $5.3 billion for states and $165 million for tribes in the 2022 fiscal year, are part of the $550 billion infrastructure law that was passed by Congress last year.

The money will be paid out through formulas by the U.S. Department of Transportation through its Bridge Replacement, Rehabilitation, Preservation, Protection and Construction Program. The overall program will provide $26.5 billion to states and $825 million for tribal transportation facilities for bridge projects over the next five years.

The announcement comes on the 60th day since the infrastructure bill was signed into law by Biden.

The White House said the bridge program is expected to help replace or repair approximately 15,000 highway bridges. The largest amount of money will go to California, which will receive $849.4 million in the current fiscal year and $4.2 billion over the five years that are covered by the infrastructure law.

New York has the second highest state total. It will receive $378.4 million this year and $1.9 billion over the five year period.