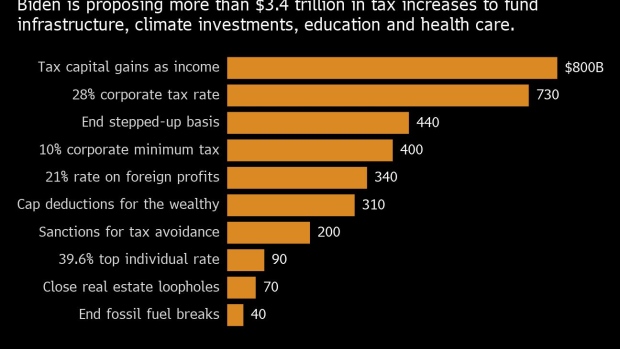 (Bloomberg) -- Democratic presidential candidate Joe Biden plans to pay for $3.2 trillion in policy proposals with new and higher taxes on the wealthy and corporations, including a measure targeting companies like Amazon.com Inc. and Netflix Inc. that have reported paying no federal income taxes in recent years.

The so-called minimum book tax, which his team estimates would raise $400 billion over a decade, would be coupled with increases in the top individual and corporate rates that Biden has already promised, according to a copy of the proposal obtained by Bloomberg News.

The plan also details his call to end loopholes worth hundreds of billions of dollars and other breaks, including stepped up basis so that individuals can no longer pass on appreciated property without having to pay tax on the gain. The document also outlines Biden’s plan to double the global intangible low tax income rate, known as Gilti, and capping the value of breaks for wealthy taxpayers. He also calls for $200 billion in sanctions on countries that “facilitate illegal corporate tax avoidance.”

With the proposal, Biden’s campaign is seeking to show a full list of taxes and other revenue-raising proposals that would pay for all of his spending plans -- a test he has set for his Democratic rivals, especially Senator Elizabeth Warren and her Medicare for All plan.

In another measure aimed at eliminating profits shifting overseas and outsourcing, Biden’s campaign said he supports imposing sanctions on places like Ireland, the Netherlands, the Cayman Islands and Bermuda that “facilitate illegal corporate tax avoidance and engage in harmful tax competition.” His team said it conservatively estimates the revenues raised at $200 billion.

“The vice president does think it’s very important to be clear with the American people regarding how you’re going to pay for things in order to demonstrate they can actually get it done,” said Biden policy director Stef Feldman.

Senator Bernie Sanders has said that his health care plan alone would cost more than $30 trillion over a decade.

Biden “wants to make sure that he’s putting proposals out there that he can actually deliver on for folks,” Feldman said. “He thinks that in many ways it makes it easier for people to buy into the idea that we should be making these investments because they respond to it along the lines of, ‘Oh, you know what, it does seem like wealthy people can pay a little bit more if what we get is this.’”

Biden would introduce a 10% minimum tax on book income aimed at companies that reported net income of more than $100 million in the U.S. but paid zero or negative federal income taxes.

Such companies, including Amazon, Netflix and others, have been able to pay no federal taxes in recent years because they were able to use tax breaks from building facilities, investments, paying employees in stock, or carry over losses from years where they weren’t profitable. The minimum book tax would give credit for foreign taxes paid and continue to allow carryovers. The revenue estimate of $400 billion over 10 years is based on its conclusion that about 300 companies would end up being liable for the tax.

Biden is also proposing to double Gilti, a minimum tax on foreign profits that became law as part of the 2017 Republican tax overhaul, to 21%. That would raise $340 billion in revenues, according to a September paper titled “Taxing the Rich: Issues and Options” from New York University professors Lily Batchelder and David Kamin. But raising the foreign rate to 21% while increasing the corporate rate to 28% still encourages corporations to store assets and operate offshore, though less so than under the current system where the rates are 10.5% and 21%, respectively.

Biden is also calling for capping the value of tax breaks for the wealthy at 28%, which would raise $310 billion, according to figures cited by his campaign from Batchelder and Kamin. He would also eliminate capital gains loopholes for real estate, including an end to special qualifying rules for pass-through income deduction.

The former vice president has previously committed to raising the top individual tax rate to 39.6% – its level before the 2017 Republican tax cuts became law – and to increasing the top corporate tax rate to 28%. It was 35% before the GOP overhaul and has since been cut to 21%.

Additional revenue-raising measures that Biden supports include ending $40 billion in fossil fuel subsidies and taxing capital gains as ordinary income for taxpayers with more than $1 million income to raise $800 billion over a decade.

--With assistance from Laura Davison.

To contact the reporter on this story: Jennifer Epstein in New York at jepstein32@bloomberg.net

To contact the editors responsible for this story: Wendy Benjaminson at wbenjaminson@bloomberg.net, John Harney