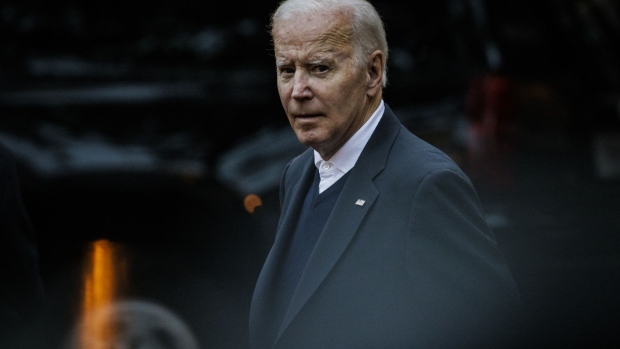 US President Joe Biden leaves Holy Trinity Catholic Church before attending the Phoenix Awards Dinner in Washington, D.C., US, on Saturday, Oct. 1, 2022. The Biden administration this week was accused in a lawsuit by six Republican-led states of overstepping its authority with a plan to forgive federal student loans. Photographer: Samuel Corum/Bloomberg , Bloomberg

(Bloomberg) -- President Joe Biden will head to the New York area Thursday for a jobs event hosted by IBM Corp. and a pair of fundraisers ahead of November’s midterm elections.

The trip will include a visit to the IBM campus in Poughkeepsie, according to a White House official who asked not to be identified because the trip hasn’t yet been announced.

Biden is expected to then travel to New Jersey for a fundraiser hosted by the Democratic National Committee. The event will be held at the Middletown home of Gov. Phil Murphy, a former Goldman Sachs Group Inc. executive, NJ Advance Media reported.

From there, Biden will travel into New York City for a fundraiser to benefit the Democratic Senatorial Campaign Committee. That event will be hosted by James Murdoch -- son of News Corp. Chairman Rupert Murdoch -- Politico previously reported.