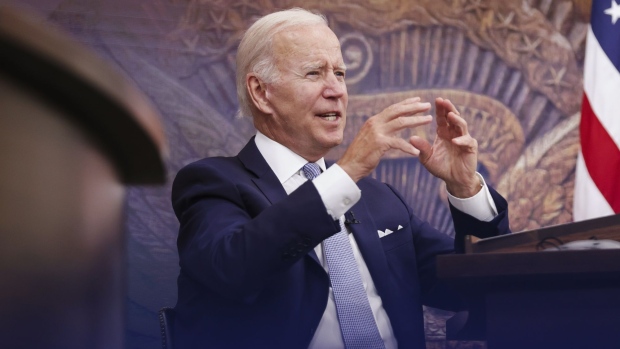 (Bloomberg) -- President Joe Biden said the unemployment rate falling to pre-pandemic lows was “the result of my economic plan” as the White House sought credit for surging jobs gains that bolstered the president’s insistence the nation has not fallen into recession.

“More people are working than at any point in American history,” Biden said in a statement Friday. “That’s millions of families with the dignity and peace of mind that a paycheck provides. And, it’s the result of my economic plan to build the economy from the bottom up and middle out.”

The 528,000 jobs added in July was more than double the 250,000 predicted in a consensus estimate of Bloomberg economists. The overall unemployment rate fell to 3.5%, Labor Department data showed, matching a five-decade low.

The gains came even as White House officials had warned earlier in the week that they expected job growth to cool. Biden has said his goal is for “steady, stable” economic growth. The figures sent stock futures tumbling as analysts predicted that the robust job market would leave the Federal Reserve more likely to aggressively hike interest rates in September as the central bank tries to fight soaring inflation.

Still, the strong labor market helps Biden argue that the overall economy remains strong despite two consecutive quarters of negative GDP growth, which has prompted Republican criticism that the US has entered a recession.

“There’s more work to do, but today’s jobs report shows we are making significant progress for working families,” Biden said.

The jobs report caps a stretch of good fortune for the president, who saw his approval rating slip to record lows last month. Since then, Senate Democrats have agreed on a legislative package that includes subsidies to lower the cost of health care and electric vehicles, gas prices have fallen significantly, and Congress approved a package that included more than $50 billion in subsidies for domestic semiconductor manufacturing.