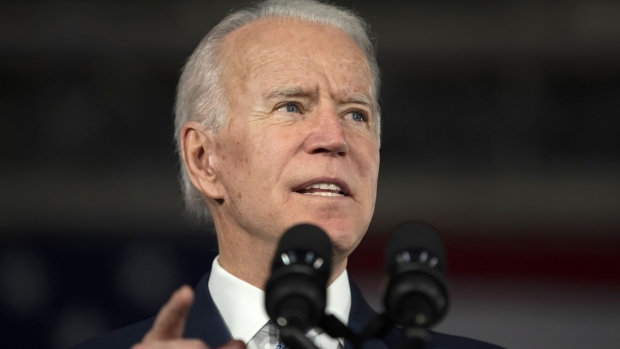 (Bloomberg) -- Democratic presidential front-runner Joe Biden said investors and corporate leaders should heed the warnings of medical experts and not to push, along with President Donald Trump, for Americans to go back to work before the danger from the virus has faded.

“Listen to the docs, listen to the researchers, listen to the infectious disease specialists, because if we don’t do that we’re going to find ourselves in a position where we’re going to be worse off at the end of the day, economically, if we went back too quickly,” he said. Health experts have warned that a too-soon return to normalcy could trigger a second wave of illness.

Some high-profile billionaires, including former Goldman Sachs Group Inc. CEO Lloyd Blankfein and Golden Nugget casinos owner Tilman Fertitta, have made public statements pushing for businesses to begin reopening. Blankfein’s longtime deputy at Goldman, former top Trump economic adviser Gary Cohn, asked on Twitter if it was time “to start discussing the need for a date when the economy can turn back on.”

Others have urged more caution. Dallas Mavericks owner Mark Cuban, for instance, told Bloomberg News that officials should “ignore anything someone like me might say.”

Biden had a similar view. Business leaders should heed experts’ advice about “what is it that is going to get us to a place where it’s safe for people to go back to work and be interacting in a way that we did in the past, rather than set some arbitrary date,” he said, offering a more cautious view than Trump, who says he hopes to get much of the country back to normal by Easter on April 12.

“I understand the reason why we want to move,” Biden said, but suggested that the stimulus bill the Senate is finishing will begin to boost the economy without the health risks of sending millions of workers back to offices, stores, restaurants and factories. He said more economic stimulus will be needed because “there’s a way to infuse into the system, the economy, the ability to people to be stable and when this is over to be able to come back in full bore.”