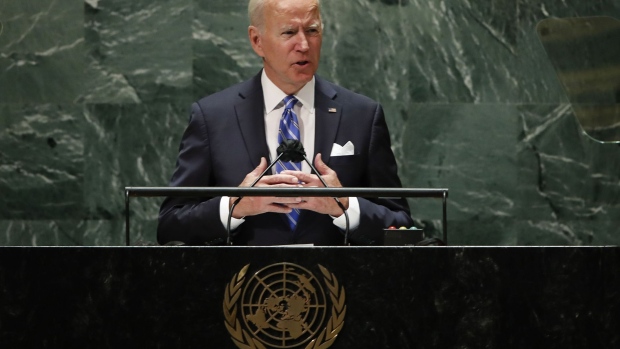 NEW YORK, NEW YORK - SEPTEMBER 21: U.S. President Joe Biden addresses the 76th Session of the U.N. General Assembly on September 21, 2021 at U.N. headquarters in New York City. More than 100 heads of state or government are attending the session in person, although the size of delegations is smaller due to the Covid-19 pandemic. (Photo by Eduardo Munoz-Pool/Getty Images) , Photographer: Pool/Getty Images North America

(Bloomberg) -- President Joe Biden urged the world to turn from conflict toward cooperation against the urgent threats of climate change and disease, seeking to shore up international alliances shaken by recent U.S. foreign policy missteps.

“Instead of continuing to fight the wars of the past, we are fixing our eyes and devoting our resources to the challenges that hold the keys to our collective future,” Biden said Tuesday in his first speech to the United Nations General Assembly in New York.

He described climate change and the continuing coronavirus pandemic as “urgent and looming crises wherein lie enormous opportunities,” if the globe can “work together to seize” them. Biden pledged that the U.S. would provide twice as much support to an international fund to help low-income countries adapt to a warming climate -- in April he had committed $5.6 billion for that effort.

He warned that the world will face further pandemics, and that without action on pollution, humanity will suffer “the merciless march of ever-worsening droughts and floods, more intense fires and hurricanes” and intensifying heat waves and sea level rise.

But the president’s attempts to burnish U.S. standing in the world have run headlong into growing anger in foreign capitals. Some foreign leaders were upset over the hasty withdrawal of American troops from Afghanistan; France is outraged over a new defense alliance that calls for the U.S. and U.K. to provide nuclear-powered submarines to Australia.

The deal cost Paris a $66 billion contract to build Australia a diesel-powered submarine fleet. In response, France recalled its ambassador from Washington on Friday.

French leaders say they were blindsided by the U.S.-Australia agreement. The White House has said it was Sydney’s obligation to inform France that it was ending their submarine deal.

Biden will meet with the prime ministers of Australia and the U.K., Scott Morrison and Boris Johnson, later Tuesday. He and French President Emmanuel Macron, who is not attending the General Assembly, are expected to talk by phone within days.

The president again defended his Afghanistan withdrawal, and said the U.S. “will continue to defend ourselves, our allies and our interests against attack, including terrorist threats.

“But the mission must be clear and achievable,” he added, and “U.S. military power must be our tool of last resort, not our first.”