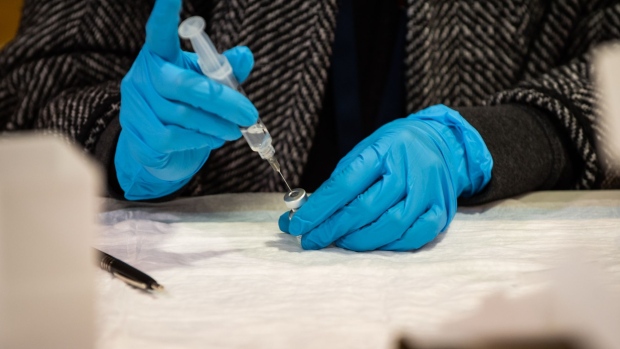 A healthcare worker prepares syringes filled with the Pfizer-BioNTech Covid-19 vaccine at the University of New Mexico's Gallup campus in Gallup, New Mexico, U.S., on Tuesday, March 23, 2021. Three months into the vaccination campaign in the Navajo Nation, about 70% of the area's user population-people who have visited a health care facility in the last three years-has received at least one dose of the vaccine. Photographer: Cate Dingley/Bloomberg , Bloomberg

(Bloomberg) -- White House Vaccinations Coordinator Bechara Choucair is leaving the administration to return to the private sector, he said in a message Sunday to Bloomberg News.

Choucair’s last day will be Monday. He joined President Joe Biden’s team during the transition last year and was charged with accelerating the nascent Covid-19 vaccination effort Biden inherited upon taking office in January.

Choucair, a former Chicago health commissioner and senior executive at Kaiser Permanente, is departing after the U.S. expanded access to vaccines for all people over age 5 and widely approved booster doses for adults.

The vaccines helped reopen workplaces, travel and commerce. Yet uneven uptake of the shots, combined with the delta variant, meant the virus continued to claim American lives on a staggering scale. More than 175,000 people in the U.S. have died from Covid since June 1, a period when vaccines were widely available to adults.

The vaccination challenge shifted during his tenure. What started as an operational problem to get scarce supplies to priority groups evolved in the spring to a persuasion campaign to convince hesitant parts of the public to get the shots.

Almost 63% of Americans over 5 years old are fully vaccinated, including seven in 10 adults, according to Centers for Disease Control and Prevention data.

Despite that broad uptake, the Covid vaccines -- and Biden’s push to require them for most workers -- have become politicized. Republicans and rural residents remain the most resistant to the vaccine. At least 30% of each group said they will “definitely not” get vaccinated in an October poll from the Kaiser Family Foundation.