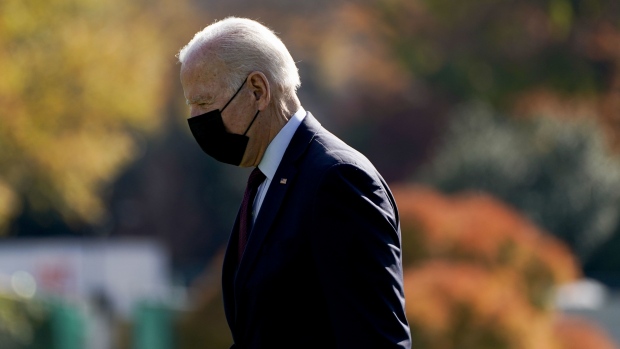 (Bloomberg) -- About 92% of federal government employees have had at least one Covid-19 shot, according to data released by the administration following President Joe Biden’s vaccine mandate for the workforce.

An agency-by-agency breakdown of compliance rates on Wednesday showed a range of outcomes. Across the government, 92% of the estimated 3.5 million federal workers have at least one dose. About 4.5% -- more than 157,000 people -- either have requested or been granted exemptions from the mandate, the report also found.

The Agency for International Development has the highest vaccination rate, with 97.8% of its workforce receiving at least one shot, while the Department of Agriculture has the lowest, with 86.1%.

The administration deemed nearly 96% of Agriculture workers in compliance with the mandate, suggesting a large number of exemptions.

Other agencies reported a high share of workers seeking exemptions. The Department of Veterans Affairs, for instance, reported 98% “compliance” with the mandate, but only 87.8% of its staff have at least one shot, meaning that more than 10% of the agency’s workforce sought an exemption -- the largest proportion of any agency.

The Departments of the Interior, Justice, Homeland Security and Social Security Administration also all reported vaccination rates lower than 90%.

About 3.5% of the workforce, or 120,000 people, haven’t reported vaccination or sought an exemption. For those workers, “agencies are beginning a period of education and counseling, followed by additional enforcement steps,” according to a statement issued by White House spokesman Kevin Munoz.

The vaccine requirement has been implemented without disruptions to government services, according to the statement.