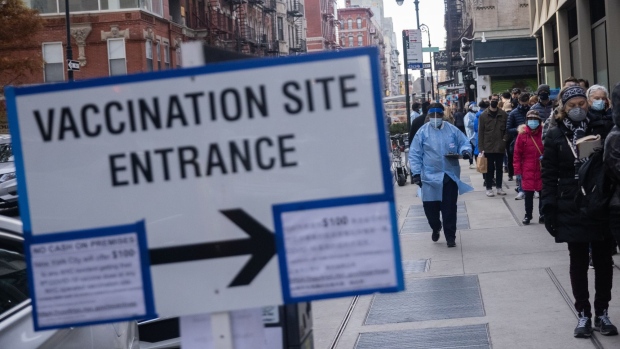 Residents wait in line at a Covid-19 vaccination site in the Chinatown neighborhood of New York, U.S., on Sunday, Dec. 5, 2021. Five months after President Joe Biden declared the U.S. to be on the verge of defeating Covid-19, the virus threatens a winter resurgence across the country with the omicron variant threatening to fuel an already high case count. , Bloomberg

(Bloomberg) -- States and businesses will have to decide for themselves whether American workers should be required to get coronavirus shots, after President Joe Biden’s flagship vaccination mandate was gutted by the U.S. Supreme Court.

The court on Thursday blocked Biden’s workplace health rule that would have required companies with 100 or more employees to either mandate Covid-19 vaccination or weekly testing. A separate rule, requiring vaccination for federal contractors, earlier stalled amid legal fights.

Taken together, the court decisions exempt millions of workers from measures Biden announced in the fall as vaccinations slowed and the delta variant fueled a new spike in cases. Despite ample supplies of shots, the U.S. badly trails other industrialized nations at inoculations, with less than 63 percent of the population fully vaccinated, according to the Bloomberg Vaccine Tracker.

The U.S. vaccination campaign has suffered from political divisions, with polls showing Republicans far less willing to get shots than Democrats. Many Republican political leaders have fought vaccine mandates and some have baselessly questioned the safety and efficacy of shots, undermining Biden’s effort to curb the pandemic.

Biden’s employer mandate “was the single most effective policy for getting people vaccinated,” said Lawrence Gostin, faculty director of the O’Neill Institute for National and Global Health Law at Georgetown University.

As of now, Biden is left with two remaining mandates. One requires vaccination for about 10 million health-care workers at Medicare- and Medicaid-participating hospitals and in other health-care settings, upheld by the court Thursday. The other requires shots for most federal workers.

The court’s ruling on health-care workers is a win for the administration. The rule will save lives both of workers and patients, Biden said: “We will enforce it.”

Courts have generally made clear that businesses are free to require vaccines for their workers. Biden called on businesses and states to impose mandates in places where his effort was struck down.

“The court has ruled that my administration cannot use the authority granted to it by Congress to require this measure, but that does not stop me from using my voice as president to advocate for employers to do the right thing to protect Americans’ health and economy,” Biden said in a written statement.

Since the rule was enacted, tens of millions of Americans have received a shot, saving many lives, he said.

“Had my administration not put vaccination requirements in place, we would be now experiencing a higher death toll from Covid-19 and even more hospitalizations,” Biden said.

Some business groups cheered the court decision, arguing that the vaccine mandate made recruiting and retention of workers more difficult in a tight job market. But many public health advocates criticized the decision.

“These justices looked at the words ‘occupational safety and health’ but couldn’t see the ‘and health,”’ said epidemiologist David Michaels, a former OSHA administrator under President Barack Obama who now teaches at George Washington University in Washington.

Some states have their own workplace health agencies, and many had been holding off on implementing and enforcing a rule until the top court weighed in. It’s not clear how many states will now impose their own mandates.