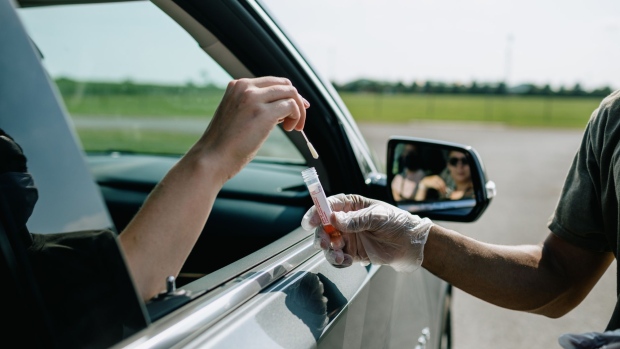 A member of the National Guard collects a Covid-19 swab test from a driver at the University of New Orleans Lakefront Arena drive-thru facility in New Orleans, Louisiana, U.S., on Tuesday, Aug. 24, 2021. The Louisiana Department of Health reported an increase in confirmed Covid-19 cases by 8,296 on Monday. Photographer: Bryan Tarnowski/Bloomberg , Bloomberg

(Bloomberg Law) -- The Biden administration’s highly anticipated vaccine mandate rule for private-sector employers will allow businesses to force workers who refuse to get the Covid-19 shot to pay for required weekly tests and masks, two sources familiar with the matter said.

The emergency rule, which will apply to companies with at least 100 employees and is expected to be released next week, will give employers the option of paying for testing and masks for unvaccinated workers or compelling those employees to foot the bill themselves, according to the sources, who requested anonymity because they didn’t have approval to discuss the rulemaking.

Employers will be required to absorb testing and mask costs in cases where a worker qualifies for an exemption to vaccination under federal law, the sources said. For instance, employers could be required to finance testing and masks for a worker who is entitled to a religious exemption or to an accommodation under the Americans with Disabilities Act. Companies also may be ordered to pay when testing costs are subject to a union bargaining agreement.

Unvaccinated workers will be required to wear masks while indoors and in close contact with coworkers, the sources said.

The emergency rule, being developed by the U.S. Labor Department’s Occupational Safety and Health Administration, remains under consideration at the White House’s regulatory office.

Final decisions on its parameters, including on testing costs, are still subject to approval by the White House Office of Information and Regulatory Affairs.

After it is released, the rule will allow for an implementation period before employers must comply or face citations of up to $14,000 per violation, the sources said.

The White House and Department of Labor declined comment. An administration official, speaking on condition of anonymity, said that any details of the forthcoming OSHA rule are premature and that the rule will be discussed in detail once publicly available in the Federal Register.

The OSHA emergency rule is at the heart of the Biden administration’s effort to increase the federal government’s response to the coronavirus’s delta variant.

President Joe Biden directed the Labor Department in September to write an emergency rule to require businesses with 100 or more employees to ensure workers are either fully vaccinated or receive a weekly test, but the issue of who will pay for testing emerged as a major point of contention inside the administration.

The mask requirement for unvaccinated workers wasn’t part of the president’s initial directive for OSHA to implement through rulemaking.

The testing-cost question has been the subject of significant lobbying pressure because of the enormous logistical and financial ramifications for many companies.

By giving employers the flexibility to pass costs on to vaccine-resistant workers, the administration appears to be seeking a way to further encourage more Americans to get the shot.

But the move also could increase backlash from opponents of vaccination and government mandates. Several state attorneys general from Republican-led states have already vowed to file lawsuits challenging the administration’s authority to impose a workplace vaccination mandate.

Many businesses welcomed Biden’s announcement of the impending rule, seeing it as providing government cover for them to require vaccinations for workers to return to the office.

OSHA released another Covid-19 emergency temporary standard earlier this year that applies only to the health-care sector.

To contact the reporter on this story: Ben Penn in Washington at bpenn@bloomberglaw.com