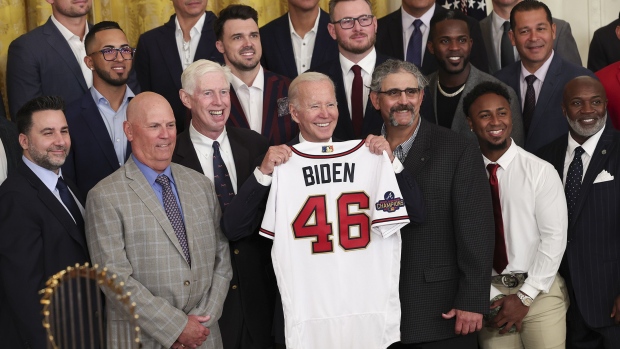 (Bloomberg) -- President Joe Biden believes it is important to have a “conversation” about the name of the Atlanta Braves and the team’s controversial tomahawk-chop chant, his spokeswoman said as the White House hosted the World Series winners.

“He has consistently emphasized that all people deserve to be treated with dignity and respect,” Press Secretary Karine Jean-Pierre told reporters Monday at the White House. “We should listen to Native American and indigenous people who are the most impacted by this.”

Biden himself said nothing about the team’s name or the chant in public remarks while meeting Braves players and staff on Monday, including star pitcher Max Fried, shortstop Dansby Swanson and third baseman Austin Riley. The president hailed the team’s playoff success and praised recently deceased Braves slugger Hank Aaron for confronting racism “with dignity and class.”

Some professional sports teams -- including Major League Baseball’s Cleveland Guardians and the National Football League’s Washington Commanders -- recently changed their names from longtime monikers that referred to Native Americans. But the Braves have so far resisted doing so, and MLB Commissioner Rob Manfred defended the team during their World Series run last year.

Manfred said that the Native American community in the Atlanta region was “wholly supportive of the Braves program, including the chop.”

The National Congress of American Indians subsequently issued a statement criticizing Manfred and the team’s use of native imagery.

“The name ‘Braves,’ the tomahawk adorning the team’s uniform, and the ‘tomahawk chop’ that the team exhorts its fans to perform at home games are meant to depict and caricature not just one tribal community but all Native people, and that is certainly how baseball fans and Native people everywhere interpret them,” NCAI President Fawn Sharp said in a statement.