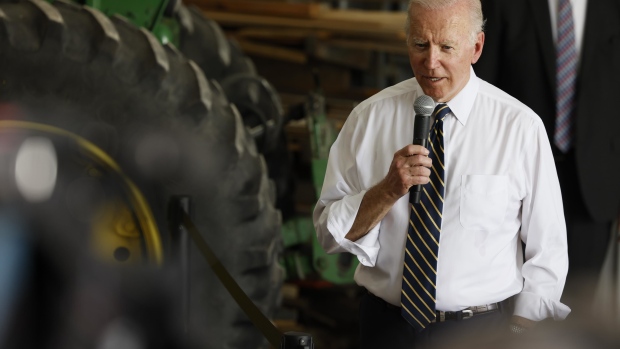 US President Joe Biden speaks during a visit to a family farm in Kankakee, Illinois, US, on Wednesday, May 11, 2022. Biden, seeking to undercut the climbing cost of food, will propose new measures to reduce costs for US farmers. , Bloomberg

(Bloomberg) -- The Biden administration on Monday proposed new regulations to strengthen competition rules in poultry and livestock markets aimed at protecting farmers and ranchers in dealing with the companies that process their products.

Long-simmering grievances over the domination of meat and poultry markets by a few giant companies have exploded into the broader political debate as rising meat prices played an out-sized role in surging inflation this past year. President Joe Biden and his top economic aides have accused meatpackers and poultry processors of abusing their market dominance while farmers complained they haven’t received a fair share of surging supermarket prices.

The proposed regulation prohibits meat processors from using specific deceptive practices in purchasing livestock, including making false or misleading statements or omitting important information to secure contracts for livestock or negotiate purchases. It also prohibits retaliation against farmers who try to join together or report abuses, according to an Agriculture Department summary.

“Highly concentrated local markets in livestock and poultry have increasingly left farmers, ranchers, growers and producers vulnerable to a range of practices that unjustly exclude them from economic opportunities and undermine a transparent, competitive, and open market,” Agriculture Secretary Tom Vilsack, who announced the proposed rule, said.

Four companies, Tyson Foods, Cargill, National Beef and JBS SA, together slaughtered 85% of grain-fattened cattle used for steaks, roasts and other cuts of meat for consumers in 2018, according to the Agriculture Department.

In much of the US, poultry farmers have even fewer buyers for their animals because of the costs of transporting the birds over long distances. Half of poultry growers effectively have a choice of only one or two companies with which they can contract, according to a study published by USDA economists in 2012.

The administration also will dedicate $15 million to work together with state attorneys general to ramp up enforcement of competition rules in agriculture.