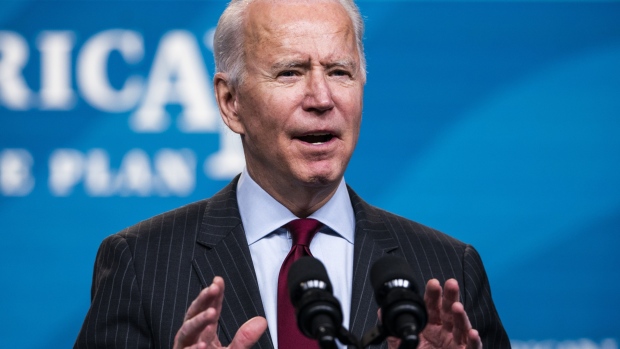 President Joe Biden warned Russian President Vladimir Putin in a call that the U.S. would “act firmly in defense of its national interests” and proposed a summit between the two leaders to discuss the “full range” of issues confronting Moscow and Washington.

The conversation between the two leaders -- the first since Biden said in a March interview that he viewed the Russian president as a “killer” -- came as tensions soar over Russia’s buildup of forces near Ukraine’s borders. It also took place ahead of expected U.S. retaliation over the SolarWinds Corp. hack that American officials blame on Russia.

“The President voiced our concerns over the sudden Russian military build-up in occupied Crimea and on Ukraine’s borders, and called on Russia to de-escalate tensions,” according to a White House statement about the call between the two leaders on Tuesday. “President Biden also made clear that the United States will act firmly in defense of its national interests in response to Russia’s actions, such as cyber intrusions and election interference.”

The ruble rallied the most in three months against the dollar after word of the call as investors bet that Biden’s proposal for a summit would de-escalate tensions over Ukraine and mitigate the prospect of harsh sanctions. In its statement about the call, the Kremlin stressed that Biden initiated the contact with Putin.

It wasn’t clear when and where a potential summit would take place, but the White House statement said Biden “proposed a summit meeting in a third country in the coming months to discuss the full range of issues facing the United States and Russia.”

On the Tuesday call, the leaders also “discussed a number of regional and global issues, including the intent of the United States and Russia to pursue a strategic stability dialogue on a range of arms control and emerging security issues, building on the extension of the New START Treaty,” the White House said.

The statement said Biden is seeking to build a “stable and predictable relationship with Russia consistent with U.S. interests.”