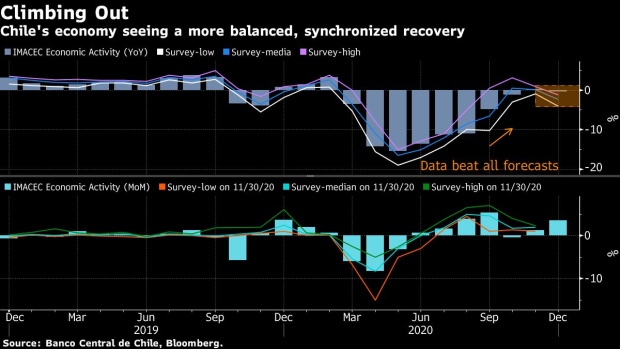 Visitors stand on the Rockefeller Center observatory deck in New York, U.S., on Thursday, March 7, 2019. U.S. stocks dropped with the dollar after a report showed American hiring was the weakest in more than a year while wage gains were the fastest of the expansion. Photographer: Michael Nagle/Bloomberg , Bloomberg

(Bloomberg) -- The first full month of Joe Biden’s presidency of the U.S. looks likely to have featured limited progress for the labor market as the coronavirus kept a lid on growth.

Economists surveyed before data on Friday anticipate an increase in the unemployment rate to 6.4%, with a tally of about 180,000 new jobs. Private payrolls will be watched closely after pandemic-related restrictions eased in many states in recent weeks, likely allowing for increased hiring at service businesses like restaurants.

Policy makers including Federal Reserve Chair Jerome Powell and Treasury Secretary Janet Yellen continue to see the labor market as a point of weakness for the economy. The central bank chief said last week that the pace of improvement has slowed in recent months and indicated that policy makers are nowhere close to pulling back on support.

“Continued progress in many industries has been tempered by significant losses in industries such as leisure and hospitality, where the resurgence in the virus and increased social distancing have weighed further on activity,” Powell told the Senate Banking Committee.

Meanwhile, the focus of Biden’s plan for $1.9 trillion in additional pandemic aid will turn to Senate consideration this week, following House passage on Saturday. Lawmakers hope to send the package to the president before March 14, when additional aid for many unemployed Americans expires.

“The $1.9 trillion relief bill passed by the House is large enough to push U.S. GDP above the pre-pandemic trend by midyear. Our analysis of the composition and associated multipliers -- the response of growth to fiscal aid -- could mean GDP growth in the vicinity of 7.4% for the full year on a 4Q-over-4Q basis, the best since 1983. Still, a recovery in economy-wide spending will not coincide with a full recovery in the labor market.”

Elsewhere, the U.K. chancellor will unveil a new budget, and China’s National People’s Congress presents the country’s latest economic goals. Central banks in Australia, Malaysia and Poland are among those scheduled to set rates.

In the U.K., Chancellor Rishi Sunak will unveil the country’s much-delayed budget on Wednesday, marking the first formal assessment of the overall damage inflicted on the public finances from the coronavirus. Observers are keenly watching for evidence that he will follow through on his hints of fiscal tightening to pay for the ballooning costs of the crisis, with an increase in corporation tax touted as one possible measure.

The euro zone’s inflation rate for February may provide a modicum of comfort for policy makers at the European Central Bank as they ponder the strength of the region’s recovery. Consumer prices probably held at 0.9% on an annual basis.

Turkey publishes key data next week including fourth-quarter gross domestic product on Monday, which is expected to show that a campaign of cheap credit and rapid interest-rate cuts under the now-replaced economy team led to one of the world’s biggest expansions in the period -- at the expense of the lira, inflation and foreign-exchange reserves.

A report on Wednesday will probably show Turkish inflation quickened to more than 15%, and some easing of virus restrictions is also expected during the week.

On Sunday, China will release purchasing managers’ surveys for February that are likely to show the recovery in the world’s second-largest economy remains in strong shape, albeit with activity cooling slightly from the prior month.

That precedes the all-important National People’s Congress on Friday, where the nation’s communist leaders unveil their annual budget, economic growth goals, and targets for everything from urban job creation to consumer price inflation.

In Australia, the central bank meets on Tuesday, with no change to its main policy levers expected, while GDP data for the fourth quarter is released the following day.

South Korea trade figures out Monday are expected to confirm a continued resurgence in exports that points to the improving health of global trade. Korea will revise its GDP numbers on Thursday and release inflation figures that are seen showing a slight acceleration.

Japan’s capital spending figures due Tuesday will be used to revise GDP data that already showed stronger-than-expected business investment. The country’s jobless figures are expected to inch up from 2.9%, still leaving it at a remarkably low level for the pandemic-hit world.

Chile’s central bank on Monday posts its January economic activity report. The economy’s uneven recovery out of the pandemic recession took on a more balanced look in December as services rebounded sharply after lagging behind consumption and manufacturing.

On Wednesday, Brazil’s 2020 performance will be laid bare with fourth-quarter and full-year GDP data. The government’s outsized response -- spending roughly 8% of GDP coupled with record-low interest rates -- probably limited the annual contraction to -4.2%, the least among the region’s big economies.

The country’s challenges are mounting however: all that stimulus further battered Brazil’s finances and stirred up inflation that’s likely to hasten central-bank tightening.