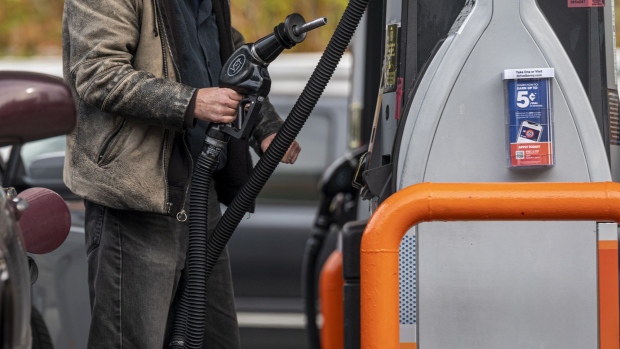 A customer holds a fuel pump nozzle at a 76 gas station in San Francisco, California, U.S., on Monday, Nov. 15, 2021. Gasoline pump prices hit a record in California as the most populace U.S. state grapples with the worst of a nationwide surge in energy prices ahead of the Thanksgiving holiday. Photographer: David Paul Morris/Bloomberg , Bloomberg

(Bloomberg) -- The Biden administration is working with oil-producing countries to ensure supply rises to meet demand, according to the White House, as prices surge to the highest level in seven years.

The White House plans to continue to monitor prices in the context of global growth and hold discussions with OPEC+ countries as needed, National Security Council spokeswoman Emily Horne said in a statement on Tuesday.

“We continue to work with producer and consumer countries, and these steps have had real effects on prices and ultimately tools continue to remain on the table for us to address prices,” Horne said.

Increased gasoline prices have been a major driver of inflation during Biden’s term, and the White House has sought to contain costs for motorists. Rising prices are hurting Biden’s approval rating and make it harder for Democrats to keep control of the House and Senate in November’s elections.

In November, Biden announced the release of 50 million barrels from the Strategic Petroleum Reserve in a move coordinated with India, Japan, South Korea and China. The administration sold 18 million barrels of oil from the reserve that it expects will be delivered to the market in February and March, Horne said.

Biden has also asked the Federal Trade Commission to investigate “potentially illegal conduct” by oil and gas companies. The White House has said that increases of prices at the pump even when crude oil was lower suggests the possibility of anticompetitive behavior.

Biden is committed to working with other countries to bring down the cost of oil, and ultimately gasoline prices, Horne said.

Futures in New York climbed to $85.74 a barrel, the highest since October 2014. Traders are paying higher and higher premiums for cargoes in Asia, as fears fade over the demand impact from omicron, while supplies are tightened by a range of outages from Libya to North America.

Earlier in the week, Yemen’s Houthi fighters said they had launched a drone strike that caused an explosion and fire on the outskirts of Abu Dhabi. The United Arab Emirates is the third-largest producer in OPEC. Unrest in Kazakhstan and Syria has also fanned worries of constrained supply, while post-pandemic demand has held steady despite the emergence of new variants.

The administration has said that it has worked in coordination with members of OPEC+ -- including Saudi Arabia and the UAE -- to help address price pressures. Still, oil-producing nations have struggled to ramp up output after implementing sharp production cuts during the pandemic.

Some lawmakers have urged Biden to ban U.S. oil exports, though industry experts have warned that such a measure would backfire by throwing international markets into turmoil. Energy Secretary Jennifer Granholm said last month the idea was no longer under consideration within the administration.