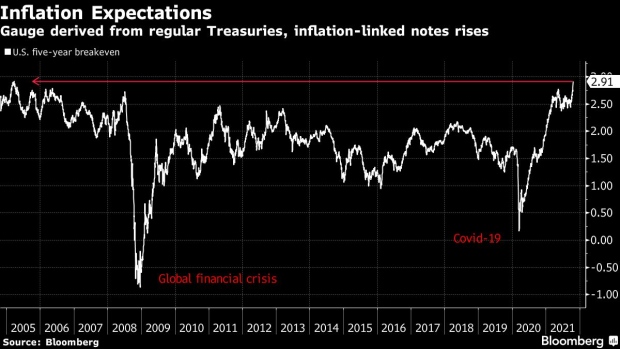 In negotiating a slimmed-down, front-loaded version of his Build Back Better agenda, President Joe Biden could end up worse off on two fronts: The 10-year program will likely be less economically transformative than he once hoped, while still running the risk of stoking inflation in the shorter term.

Much of the legislation is still being worked out, but the ultimate package looks set to clock in around $2 trillion, rather than the $3.5 trillion Biden had previously sought. While some planks are primed for the chopping block -- two free years of college education, for instance -- a preponderance will probably be retained, with their costs curtailed through means-testing, or, more likely, by having them end sooner.

The package will still greatly expand the government’s role in the economy -- providing more help for Americans with young children and those caring for elderly parents and strengthening health care. But the early expiration of many measures means they won’t permanently change the face of American society, unless they’re renewed in the future.

“Longer-term growth could be materially impacted by scaling back the legislation,” said Mark Zandi, chief economist at Moody’s Analytics, who briefed House Democratic lawmakers on Wednesday. Unless Congress extends programs, “the impact they’ll have in transforming the economy in the long run” will depend on “what is scaled back, which at this time is highly uncertain,” he said.

The bunching up of the spending in the early years could have downsides in the shorter term as well -- by pumping demand into an economy that in many ways is already straining at its limits, as evidenced by widespread supply bottlenecks and rising price pressures. That danger is compounded by the likelihood that the plan’s “pay-fors” -- tax increases that could inhibit investment -- will be back-loaded, no matter what shape they finally take.

“Right now anything that expands aggregate demand is not warranted, not advisable,” said Michael Feroli, chief U.S. economist for JPMorgan Chase & Co. “The economy seems to be operating pretty close to its capacity constraints.”

The mismatch between some of Biden’s plans and the salient economic concerns of the moment was visible at a CNN town hall in Baltimore Thursday night. The president heard questions on high fuel costs, supply chains and inflation, responding that price increases would likely subside but may actually persist if his economic agenda fails to pass.

“I don’t think it’ll last,” Biden said. “If we stay exactly where we are, yes. If we don’t make these investments, yes.”

Federal Reserve policy makers last month saw the possibility of “additional expansionary fiscal actions” as an upside risk to the outlook for growth, without explicitly connecting it to prospects for inflation. But the central bank has been closely monitoring dynamics that feed through to public expectations for prices over the medium and longer term, given concerns that that could make high inflation endemic.

Market measures of inflation expectations are telegraphing worry: one gauge derived from five-year Treasury securities jumped Thursday to the highest since at least 2004.

Some additional government outlays would be welcome, to be sure. Otherwise, the economy would face a steep fiscal cliff following this year’s bulge in stimulus spending. That’s particularly the case when it comes to the beefed-up child care tax credit that was enacted in Biden’s rescue plan and is due to expire at year-end unless it’s extended.

Even with Biden’s initiatives, the economy will face a significant fiscal drag next year from withdrawal of the Covid relief measures, said a White House official who declined to be identified. That should help to mitigate inflationary pressures.

Biden’s economic agenda was conceived during the 2020 presidential-election campaign, long before supply-chain constraints and labor shortages emerged as obstacles to growth. And it was always geared toward addressing long-term national problems such as infrastructure deficiencies, the decline of middle-class incomes and difficulties in obtaining affordable child care, health services and higher education.

Democratic congressional leaders and the White House have been forced to rejig their plans given objections to the previous size of the package from moderate lawmakers -- whose support is vital in the closely divided House and Senate. But Biden can ill afford to lose support elsewhere in the caucus by eliminating this or that favorite measure of an individual lawmaker.

The resulting preference to spend upfront on a raft of short-term programs, rather than fully finance a select few measures over the next decade, sows inflation risk, according to former Congressional Budget Office Director Douglas Holtz-Eakin.

Holtz-Eakin, now head of the conservative American Action Forum, sees consumer prices rising at about a 4% clip next year, with the risks tilted to the upside. That compares with the median estimate of 3.3% in a Bloomberg survey -- itself an elevated figure relative to recent years.

A unified Democratic front is needed for the spending bill given united Republican opposition. GOP lawmakers have blasted Biden’s $1.9 trillion March pandemic-relief bill as fueling price pressures and keeping workers on the sidelines, with the proposed social-spending package only set to make things worse.

But administration officials argue that the social spending package, combined with stepped-up outlays on productivity-enhancing infrastructure in a separate bill that awaits final passage, will lift the economy’s potential to grow faster over the longer-term without generating extra inflation -- by expanding the size and skills of the workforce.

Assistance with care for children, disabled and elderly will free up workers who now stay at home to take care of family members, in the administration’s view. And the imminent potential approval of Covid vaccines for 5- to 11-year-old children also may make parents more comfortable taking in-person jobs that employers are struggling to fill -- further helping to address the current labor shortages.

A White House spokeswoman defended the package being formulated, citing a letter by 17 Nobel Prize-winning economists released Sept. 20 -- before the current round of negotiations -- that argues Biden’s Build Back Better plan would reduce longer-term inflationary pressures by educating more productive workers and making it easier for parents to work outside the home.

Even so, many economists remain concerned, especially given the difficulty Democrats are having uniting behind the slew of tax hikes that the administration and top tax-writing lawmakers have been planning on for months to help fund the president’s agenda.

“You could wind up with primarily a deficit-financed spending bill that is going to be rolled out in an economy near full employment,” said Ethan Harris, head of global economics research at Bank of America Securities. “It will make the labor market even hotter and create even more price pressure.”