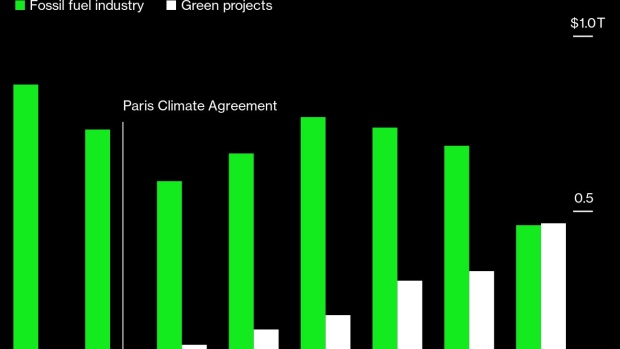 Oil pump jacks operate at the Inglewood Oil Field in Culver City, California, U.S., on Sunday, July 11, 2021. Oil dipped after a two-day gain as investors assessed the demand outlook amid a resurgence of Covid-19 in many regions. Photographer: Kyle Grillot/Bloomberg , Bloomberg

(Bloomberg) -- As executives from JPMorgan Chase & Co., Citigroup Inc., Deutsche Bank AG and other lenders prepare for the most important UN climate summit in six years, their companies continue to help provide almost as much money for fossil fuels as for green projects.

Scientists have made clear that time is running out to prevent a climate catastrophe. Yet this year alone, banks have organized $459 billion of bonds and loans for the oil, gas and coal sectors, according to data compiled by Bloomberg. At the same time, they arranged $463 billion worth of green bonds and loans, with fees more or less evenly split.

Since the Paris Agreement at the end of 2015, banks have played a prominent role in enabling the warming that’s behind increasingly deadly storms, fires and floods. During the period, the industry generated more than $17 billion of fees from facilitating almost $4 trillion of fossil-fuel financing. The money has helped feed carbon emissions that, at the current pace, mean temperatures will rise well above the 1.5 degrees Celsius identified as critical to avert irreversible damage.

Now, as global leaders prepare to descend on Glasgow, Scotland, for the COP26 climate talks, a growing chorus of investors and activists are demanding that banks stop funding polluters -- before it’s too late.

Next month’s talks in Glasgow have been dubbed the finance COP, meaning focus will be on the extent to which the banking industry is pulling its weight to help prevent carbon dioxide from spewing into the atmosphere. In the lead-up to the talks, banks and asset managers have released a deluge of climate declarations, assuring stakeholders they’re committed to eliminating net emissions from their lending and investing portfolios -- or reaching net zero -- by the middle of the century.

On the surface, banks are acknowledging the issue. Most of the world’s biggest lenders, including JPMorgan, Citigroup, Deutsche Bank and  Bank of America Corp., are part of the Glasgow Financial Alliance for Net Zero. But in reality, they’ve yet to show that they can purge their loan books of CO2 fast enough.

“At the top of many big banks, there is a realization that they will have to step back from financing certain fossil-fuel projects, but many are only just beginning this journey,” said Jessica Ground, the London-based global head of environmental, social and governance at Capital Group, which has $2.6 trillion of assets under management.

Bill Winters, the chief executive officer of Standard Chartered Plc, said earlier this month that " it’s just not practical” to expect banks to stop financing the fossil-fuel industry, in part because to do so would undermine transition efforts, particularly in the emerging markets. And then last week, Goldman Sachs Group Inc. CEO David Solomon said his firm won’t abruptly stop working with fossil-fuel companies, stressing the need for a balanced transition to green energy that avoids higher energy prices.

According to the Sunrise Project, an environmental nonprofit based in Australia, if banks are to be taken seriously on their net-zero commitments, they need to stop financing companies and projects expanding coal, oil and gas output infrastructure or power generation. And all corporate finance and underwriting of rich-world coal companies should be phased out by 2030 “at the very latest,” the group said in an email. For non-OECD countries, the deadline should be 2040, it said.

Banks will often respond to criticisms of their fossil-fuel financing by citing their commitment to funding clean energy, Sunrise Project said. But the group characterized this as a “distraction.” Investing in clean energy doesn’t alleviate the effects of lending to the world’s worst polluters, it said.

JPMorgan, the biggest U.S. bank, is the world’s leading provider of finance to the fossil-fuel industry and also ranks as the No. 1 underwriter of green bonds, according to data compiled by Bloomberg. The New York-based firm has made about $985 million in revenue since the end of 2015 arranging debt and lending for the oil, gas and coal industries. That compares with the roughly $310 million it generated in income from green finance.

San Francisco-based Wells Fargo & Co. provides even more loans to the fossil-fuel industry than JPMorgan, but does far less bond underwriting. Citigroup places second among the top providers of fossil finance, from which it has generated almost $890 million in revenue during the past six years, Bloomberg data show. Bank of America is next with roughly $690 million.

To measure the involvement of each bank, Bloomberg’s data include the bonds and syndicated loans underwritten for companies that produce or extract oil, natural gas and coal. Those figures are assessed against the debt that each bank arranged on behalf of corporate and government issuers for eligible climate or environmental projects.

There are weaknesses in the data set. For example, it’s possible some portion of a loan to an oil company might have been used on a clean-energy project. Bloomberg started tracking fees that banks earn from extending loans in 2018, so fees from 2016 and 2017 might be under-represented. But none of that changes the overall picture left by the data -- namely that banks have financed hundreds of billions of dollars worth of carbon emissions.

At the current rate of greenhouse-gas emissions, the United Nations warns that the average global temperature is set to be 2.7 degrees Celsius above pre-industrial levels by the end of this century. At that level of warming, whole populations will be displaced by rising sea levels, vast numbers of species will face extinction, and deadly wild fires and flooding will become far more frequent.

The International Energy Agency said this month that the world is woefully behind in delivering the necessary emissions cuts. “Every data point showing the speed of change in energy can be countered by another showing the stubbornness of the status quo,” the agency said in its latest report.

At JPMorgan, executives say they’re aware of the urgency of the moment. “Climate change is a critical issue of our time, and we are committed to doing our part to address it,” Marisa Buchanan, the firm’s global head of sustainability, said earlier this month in connection with a public commitment to carbon neutrality by mid-century.

JPMorgan said in May that it plans to report a 35% reduction in “operational carbon intensity” for its oil and gas portfolio by the end of the decade. The commitment followed the company’s announcement last year that it was aligning its financing activities with the Paris Agreement.

Nogales called JPMorgan’s decision to join the Net-Zero Banking Alliance a “positive step.” But he also referred to it as “a high standard of action that, according to the IEA, means turning off the finance tap to new fossil-fuel projects as soon as this year.” The extent to which signatories do this will be the “real test,” and one that investors “will be watching very closely,” Nogales said.

An important plank of the 2015 Paris climate agreement was to involve the financial industry, reflecting the need to steer money away from activities that pollute. The latest flurry of net-zero commitments from banks and asset managers follows on from that agreement. But details on how they plan to achieve carbon neutrality 30 years from now remain scarce.

Nogales said part of the problem is that most net-zero goals are too far in the future. “The problem with very long-term targets is that it’s typically going to be a different set of executives running those businesses at that point,” he said, adding that Generation Management wants to see CO2 targets set for 2030, in line with the UN’s recommendations to halve emissions in the coming decade.