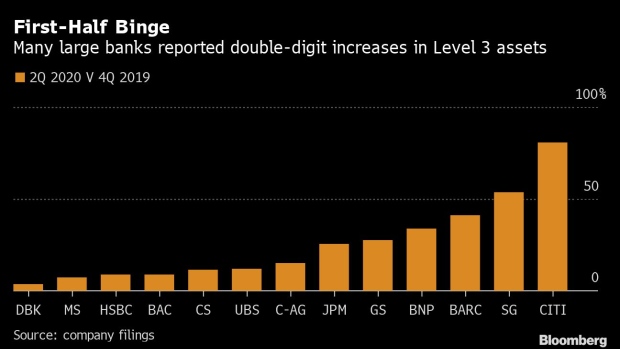 Sunlight catches the on the top of The O2 Arena entertainment venue in this aerial view in London, U.K. on Wednesday, April. 22, 2020. U.K. inflation slowed in March as the nation entered lockdown and oil prices continued to tumble. Photographer: Jason Alden/Bloomberg , Bloomberg

(Bloomberg) -- The pile of the murkiest trades at global banks, long the bane of regulators, got much bigger during Covid-19.

Lenders including Barclays Plc, Citigroup Inc., BNP Paribas SA and Societe Generale SA reported a surge of more than 20% in their most opaque assets during the chaotic first half of 2020, Bloomberg calculations show. The banks are now sitting on hard-to-value trades that they say are worth about $250 billion, including categories that gained notoriety during the financial crisis, such as complex debt securities.

There’s no single, clear-cut explanation for the jump in these so-called Level 3 assets. For some, the surge was a natural consequence of pandemic turmoil: safer assets became difficult to price as markets froze, and risk managers had to shunt them into a different category, according to analysts and people familiar with the situation. Others are likely to have added to their riskiest bets after seeing the potential for a windfall in the chaos, said Jerome Legras, managing partner at Axiom Alternative Investments.

“Banks need a little bit of complexity to actually make a lot of money,” said Legras, who oversees about 1.6 billion euros ($1.9 billion) at Paris-based Axiom, including bank debts. “Clearly, there is a link with record profits.”

Either way, for many of the lenders, the increase since the end of December was the biggest in half a decade. As European banks don’t report quarterly Level 3 figures, Bloomberg News used six-month figures for comparison.

While their holdings of this riskiest category of assets have fallen since 2008, they remain significant compared with key capital strength metrics. Level 3 assets are greater than 30% of common equity Tier 1 capital at lenders including Deutsche Bank AG, Credit Suisse Group AG, Barclays, Societe Generale and Credit Agricole SA, according to Bloomberg calculations.

“Level 3 assets have a reputation as toxic, loss-prone assets which are hidden to the public,” said Michael Huenseler, who helps oversee 28 billion euros at Assenagon Asset Management in Munich, including bank debt. In view of that, his firm “appreciates a maximum of transparency and guidance from bank management.”

Banks split their assets into three categories. Level 1 covers those with transparent, readily available prices, like stocks. Level 2 assets, which include many derivatives, are harder to value, but there’s some external data available for pricing.

There’s little market data for Level 3 assets -- which include distressed debt, some mortgage-backed bonds, high-risk loans and derivatives linked to everything from interest rates to corporate debt -- so banks get to value them based on historical trends and their own risk assumptions. That leeway makes the category known as “mark-to-myth,” Berenberg analyst Eoin Mullany wrote in April.

In 2008, such self-valuations proved to be unrealistic and banks lost billions of dollars. Level 3 assets have concerned regulators ever since.

This year’s increase means banks’ Level 3 assets are almost the same size as the gross domestic product of Finland -- if their valuations are accurate. The gains are “troubling,” according to Kathryn Judge, a law professor focused on finance at Columbia University in New York.

“There is far more wiggle room in the pricing process and more room for errors,” said Judge. “Regulators should be paying close attention to the valuation techniques banks are using, particularly for those banks that have substantial pools of Level 3 assets relative to CET1.”

Citigroup had the biggest Level 3 increase since December among 13 banks analyzed by Bloomberg -- up about 80% to $14.5 billion.

Goldman Sachs Group Inc.’s 28% increase to $29.4 billion makes it the second-biggest holder. The majority of its Level 3 holdings are merchant-banking investments, which also became harder to value.

Deutsche Bank holds more than any other firm, even as it struggles to shrink; Level 3 assets are greater than half its CET1 capital -- also the most of any bank.

Barclays, whose investment bank has been repeatedly criticized by an activist investor, reported an increase of about 40%.

SocGen, which has ousted executives amid trading losses, reported a 53% jump.

Credit Suisse’s Level 3 assets have declined since the first quarter, spokesman James Quinn said in a statement. The bank’s turnover of the securities -- meaning how quickly it buys and sells them -- is the highest in the industry, he said.

Some of the increases can be attributed to “transferring” Level 2 trades into the riskier category during the chaotic first quarter, when the market activity used for valuations froze up, according to Stuart Plesser and Nicolas Malaterre of S&P Ratings. For U.S. banks, that trend reversed in the second quarter as markets rallied, they said.

But crisis-driven transfers only account for some of the surge. Barclays purchased billions of pounds of “non-asset-backed loans,” its filing shows. And while SocGen transferred billions worth of existing derivatives, it also bought similar amounts of bonds, loans and other securities. HSBC added derivatives and private-equity investments.

Being able to deal in the riskiest trades is a competitive advantage, said George Kuznetsov, an analyst with McKinsey & Co. in London. A bank with “completeness of the product offering” may have reaped record profits, he said.

Legras says that expertise will help banks offset souring loans as the pandemic and its aftermath tear through the global economy -- at the risk of lurking danger.

“Bigger Level 3 means bigger investment-bank profits, and this means they can take bigger loan losses without hitting capital too hard,” said Axiom’s Legras. “This always raises the risk that there has been a mispricing somewhere, that risk management has been deficient -- and that those assets will translate into losses.”