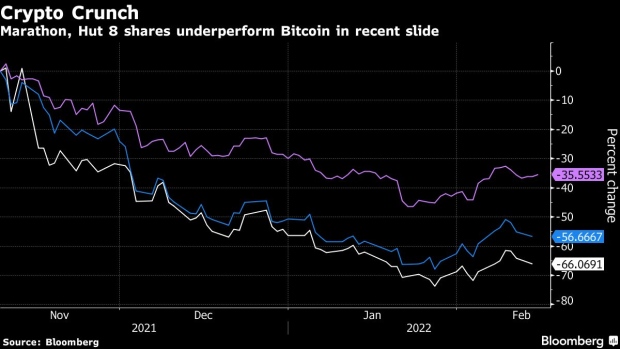 (Bloomberg) -- A pair of big Bitcoin miners are poised to sell their stock in the face of a drop in token prices that has led other miners to trade in some their Bitcoin holdings.

Marathon Digital Holdings Inc. and Hut 8 Mining Corp. have both filed with the Securities and Exchange Commission for the option to sell company stock for cash. The two are likely in bid to stay flexible in the wake of Bitcoin’s dramatic fall that could force a shakeout of miners with less efficient operations.

While Bitcoin is down about 38% from an all-time high in November, shares of both Marathon and Hut 8 remain more than 55% below their respective peaks. Hut 8 Mining’s shelf registration filed Friday was for as much as $65 million common shares. Meanwhile Marathon filed to offer up to $750 million of shares, preferred stock, warrants and units on Monday.

“We don’t control the price of Bitcoin, but we can control how prepared we are to capitalize on market opportunities when they present themselves, which Marathon has a long track record of doing successfully,” Charlie Schumacher, a spokesperson for Marathon Digital, said in an emailed statement.

The filings come as cash concerns have weighed on the industry, with some miners choosing to sell their Bitcoin holdings in order to invest in more powerful equipment or even stay afloat.

“A lot of companies with big growth plans, holding onto all their Bitcoin and growing into their facilities, are going to need money,” Christopher Brendler, an analyst at D.A. Davidson, said. “Big miners would rather sell equity, because their shareholders want them to hold their Bitcoin and not even think about selling it.”

Marathon and Hut 8 aren’t required to immediately sell those registered shares, giving the companies some time to see where the price of their stocks may be headed next. Marathon also completed a $650 million convertible bond sale in late November. Hut 8 did not immediately respond to queries.